The Automatic Millionaire: A Powerful One-Step Plan to Live and FinishRich 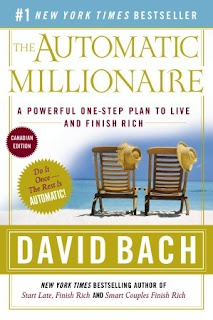 So I found another personal finance book that I had to read: The Automatic Millionaire by David Bach. I was happy to see that it was the Canadian Edition too.

Now there's a big caveat to this book: like The Wealthy Barber, The Automatic Millionaire is rather out of date.  It was published before tax free savings accounts were available for Canadians (and presumably before ETFs and index funds were around/talked about).  So he only talks about RRSPs and mutual funds.

But Bach's advice is still pretty solid. He recommends paying yourself first (at least 10% of your pay). Buying a house. Getting out of debt (especially credit card debt). And tithing (giving money or time to charity).  While some of this advice is pretty standard (you can't build wealth if you're saddled with debt), I found the house discussion particularly interesting. Here Bach was saying you can't get rich if you don't own your own house because if you're paying rent, that money is going towards making your landlord wealthy, not to your own net worth (whereas if you're paying down a mortgage, every payment is building equity within your house). This goes against the advice JL Collins gave in The Simple Path to Wealth, but is definitely worth considering.

I also liked the discussion on tithing. It's a short chapter at the back of the book that just talks about how giving attracts abundance (and how giving is very common for people who later became quite wealthy), and also how you should make sure your money is actually going to help the cause you're supporting (and not to administration fees). Again, something worth considering.

Overall, The Automatic Millionaire is another fairly basic book on personal finance. But I think it's still worth reading because now I have more to think about in terms of my own finances (which is always a good thing!)
Posted by Shauna at 1:54 AM