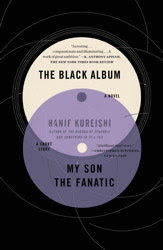 Now that school is over for the holidays, I've decided to read some books for next term. The first one I decided to read was Hanif Kureishi's The Black Album. I got it, along with two other books for my Identity in Contemporary British Fiction class. I thought The Black Album sounded interesting, so I decided to try reading it first.
The Black Album tells the story of Shahid, a young man from a Pakistani family who is just starting college. Shahid quickly ends up caught in the middle between radically different people. First, he makes friends with his radical Muslim neighbour, Riaz, who introduces him to several other radically Muslim people, namely Hat and Chad. This group follow Riaz, but Chad, who is the second-in-command, often limits access to the leader. Shahid also ends up involved with his liberal teacher, Deedee Osgood, who enjoys partying hard with sex, drugs and booze. The Black Album is the story of Shahid trying to negotiate his identity, amidst the escalating activities of his Muslim friends. Is he Muslim? Is he liberal like Deedee? Or is he something else altogether?
While it was sometimes hard to keep reading it for long periods of time, I enjoyed The Black Album. This is not something I would typically grab for myself, but it was an interesting read. I did not read "My Son the Fanatic" yet, which was included with my copy of The Black Album, but I hope to read it in the future.
Posted by Shauna at 10:32 PM