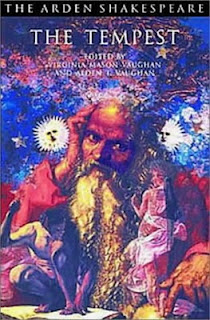 For my Identity in Contemporary British Fiction class, my seminar is going to be on John Fowles' The Collector. A lot of the criticism on the book mentions how it is similar to Shakespeare's The Tempest, so I decided to read the play so I knew exactly how The Collector is like it. Right off the bat, with the dramatis persona, I found that some of the characters from The Collector are named after characters from The Tempest. The overall plot was rather different, but I enjoyed reading it.
The Tempest opens with a storm shipwrecking the King of Naples’ ship. Everyone is scattered across an island, believing that everyone else has died in the storm. The storm was summoned by Prospero, the ex-duke of Milan; he has brought them here to teach them all a lesson and win back his dukedom.
While I wasn’t too fond of the scenes dealing with the King and his lords, I did enjoy the play as a whole. It was a magical, fun story that reminded me of A Midsummer Night’s Dream in some ways. I definitely recommend it to anyone who enjoys Shakespeare and wants a quick, easy read.
Posted by Shauna at 2:28 AM