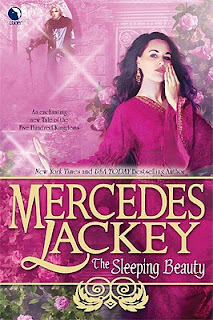 After reading Snow Crash, I had to read something that I knew would be all around more appealing to me. So today I read Mercedes Lackey's The Sleeping Beauty, which I have been hoarding since it was published last year. And now that I have the sixth book, Beauty and the Werewolf, now was a good time to get caught up with my reading!

The Sleeping Beauty is the retelling of Sleeping Beauty, Snow White, and the story of Sigurd and Brynhild all rolled into one (with even more fun!) It begins with the Princess of Eltaria, Rosamund, fleeing an evil Huntsman and being enslaved by dwarves. Rosamund's mother was killed and her father hastily remarried an "evil" sorceress. Rosamund believes that the Huntsmen was sent to kill her by her new Stepmother.

Unknown to Rosamund (and the Kingdom), the new Stepmother is actually Lily, the Fairy Godmother of Eltaria. Lily married the King in an effort to stop the Tradition, the magic of the land, actually forcing Eltaria's king down a dark path. While maintaing the ruse to fool the Tradition, Lily works to save the Princess. But all is almost foiled by the appearance of two men: a roguish middle son, and a Hero who is trying to escape his Doom (and the woman who keeps appearing, asleep in a ring of fire....) Add to that the unexpected death of the King, which leaves Rosamund and Lily scrambling to save Eltaria from invasion.

As usual, Lackey has a wonderful assortment of characters. Rosamund and Lily are both strong heroines; I loved reading about their adventures. Siegfried and Leopold were a lot of fun to follow. And I can't leave out mentioning Luna, the unicorn with the lisp!

The Sleeping Beauty was another hilarious romp through the Five Hundred Kingdoms. I absolutely loved it (especially the end of Chapter 14! I laughed extremely hard when I read that!); The Sleeping Beauty was exactly what I needed to read after being so disappointed by Snow Crash.
Posted by Shauna at 11:18 PM