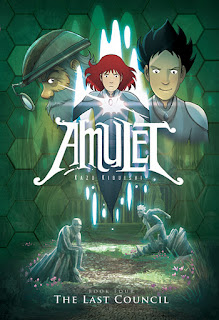 The Last Council continues the story of Emily. Along with her family and friends, Emily has arrived at the floating city of Cielis, the stronghold of the Stonekeepers. Finally Emily will be able to get some help from the Stonekeeper Council.

But all is not right in Cielis. The people are terrified, hiding in their homes and unwilling to talk to strangers. Emily and her family is separated from their friends. And the elves are arrested and left in prison (which admittedly isn't that strange. They are elves, after all. One of which is the Elf King's son). And Emily is further separated from her family when she is subjected to the Council's trials.

Admittedly, this wasn't my favourite of the Amulet series. But it was a great interlude where the stakes have just been increased. I look forward to the next installment, whenever that will arrive (as of right now it isn't even announced on Kibuishi's website, so I will probably have to wait quite a while).
Posted by Shauna at 3:54 PM