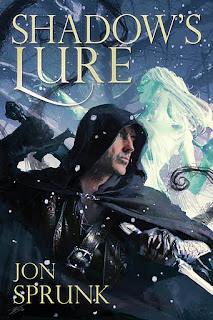 Luck was with me: the library ordered Jon Sprunk's Shadow's Lure immediately after getting Shadow's Son; I only had to wait a couple of weeks to read it!
Shadow's Lure takes place only a few weeks or months after Shadow's Son. Caim has struck off into the Northlands with only Kit for company, leaving Nimea in the hands of the new Empress, Josephine.
Caim must be the unluckiest guy in the world. He starts his adventure by getting mauled by a bear. He then stumbles his way into a conflict. The northern country of Eregoth is being taken over by a self-proclaimed Duke and his witch paramour. They have started a reign of terror, with the witch's son (known as "The Beast") murdering villages across the country.
Back in the south, things aren't much better. Josephine is on the throne, but the deposed Church refuses to lose its power without a fight; they are encouraging the people of Othir to riot against Josey. On top of that, a shapeshifting assassin is after her, making it very difficult to know whom to trust.
I enjoyed reading Shadow's Lure, but I did find Josey's chapters a bit of a drag. To me, they seemed to take away from the fun that is Caim's life. About half way through the book, I also ran into a problem with Josey's character that bothered me (I don't want to give spoilers, but it involves things that happened to her in Shadow's Son), so that made it even tougher to get through them. But her story is full of lots of political intrigue, so if you enjoy that you will enjoy reading about what happens to her.
That being said, the rest of the book was great! Caim managed to get into one scrape after another, and also really grew with his powers. He was also separated from Kit for a good portion of the book, and her sections were interesting as well. I will admit though, I was rather confused about where Shadow's Lure was heading, but it really kept me reading! I would love to read the final book, Shadow's Master, but unfortunately I'm going to have to wait until next summer for that.
Posted by Shauna at 11:01 PM