The Measure of the Magic 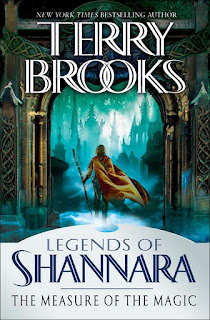 Like most of Terry Brooks' new series, The Measure of the Magic takes place right after Bearers of the Black Staff. So of course I started reading Measure right after I finished reading Bearers two nights ago. And don't get me wrong, I enjoyed Bearers a lot. But after writing my post here, I found a post on another blog, A Dribble of Ink, which nicely summed up many of my problems with it. There are many tropes which have appeared in many of Terry's books, and they can get rather tiring.
But I felt like all my concerns melted away with the Ragpicker.
As I've already said, Measure picks up where Bearers left off (so sorry for any spoilers). Prue Liss has just gotten away from the Trolls, and is hiding out in Deladion Inch's fortress. Sider Ament is dead, and his staff has passed to Panterra Qu. Panterra needs to track the traitorous troll Arik Siq, both out of the need to stop him from revealing the valley's entrances to his father, as well as for revenge. And all the while, the Trolls sit camped outside of the valley, ready to attack.
The very first chapter of Measure opens with the Ragpicker. He did not appear in Bearers, so I really wasn't expecting him. I absolutely loved his character! He was well written and just so different. I really felt like Bearers needed him to be a much better book.
Measure also seemed to flow a lot better than Bearers. Bearers seemed chaotic, flipping from character to character rather rapidly. In Measure, the focus seemed to stay on one character (or at the very least one plot strand) for a couple of chapters, giving you a better idea of what was going on in each case; the whole narrative seemed to flow a lot better.

But I have to say, I was a bit disappointed with the ending of Measure. The main problem was that I felt Measure wrapped up too quickly. I had about thirty pages left to go, and I found myself wondering how Brooks was going to end the whole story here. He did it, but I felt kind of cheated, like the story shouldn't really have ended where it did, and the way it did. It didn't feel properly ended. Especially after the King of the Silver River tells us that Pan has a great destiny to fulfill. I kind of expected to see more of his destiny, but got cheated with that as well.
Plus I think I expected some more closure, a bit more to tie the Word and Void series into Shannara. Where do the druids come from? What happens to the last staff? Are there more demons? How do the druids find (and start using) the Hadeshorn? (At least, I thought Pan and Phryne found their way to what would become the Hadeshorn. So there's another question: was that even the Hadeshorn?) I've never really believed that the two series should lead into one another, but now that they have, I feel like a lot more could have been done to tie them together. Or maybe he'll need one more series to bridge the gap (like something showing what brought about the beginning and end of the first Druid council perhaps?)
I also ran into problems with the characters (I felt like my favourites kind of got the short end of the stick in a lot of cases), but I don't want to complain about that here. That was more of a matter of personal taste (liking some characters more than others) than anything else.
So to make a long story short, I did enjoy reading both volumes in the Legends of Shannara series. I liked Measure a bit better than Bearers, but Measure really faltered at the end. Don't get me wrong, these are enjoyable reads, so if you're looking for a really quick fantasy story, these are for you. But be warned: these are fast books that don't go into as much detail as some readers might like.
Posted by Shauna at 8:39 PM