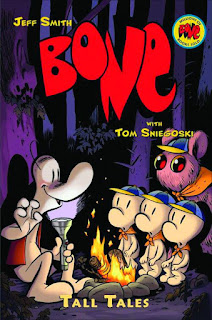 I bought Bone: Tall Tales just after I finished reading Bone.  I enjoyed that story so much that I wanted more from Jeff Smith's Bone universe.  I bought a couple of other books at the same time (Rose and the Bone Handbook).  But for a variety of reasons, I didn't end up reading them right when I bought them.  So today, I decided to remedy that.  I was originally planning on reading Rose, but instead read Tall Tales; I wanted something a bit lighter to read than I imagine Rose will be.

And Tall Tales is a relatively light read.  It's got four tall tales, which are all told during Smiley Bone's camping trip with Bartleby and the three bone scouts Ringo, Bingo and Todd. The first one concerns Smiley's cousins, Fone and Phoney Bone, back in the valley (during the events of the Bone story).  They're supposed to be doing the laundry, but Phoney Bone finds a treasure map and insists on following it.  Hilarious hijinx follows.

The other three tales concern Big Johnson Bone, the founder of Boneville.  First is the tale of his birth, and how he stood up to Old Man Winter.  Next is the tale of his eating contest against the Cobbler Gobbler.  Finally is the story of his lost years, when Big Johnson was wandering the land, exploring.  The first two stories are both short and lighter reads.  But that last one started to feel a whole lot like the epicness of the original Bone.  Sure, it's shorter, being only one story in the book rather than 9 volumes.  But some of the ideas were the same, and that's not at all a bad thing when it comes to Bone.

So overall, I really enjoyed reading Bone: Tall Tales.  If you're a fan of the original story, you should definitely give this a read, too.
Posted by Shauna at 1:31 AM