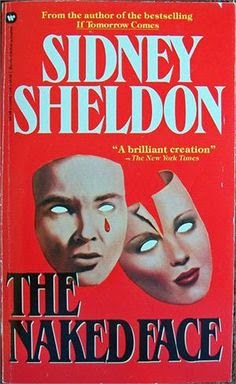 Wow. Sidney Sheldon's The Named Face is the first book I've read in a long time that's actually on The List. Everything else I've been reading has been library or Kindle books. But hopefully that's going to change over the next while because I'm hoping to stick with mostly books that are in my room taking up space.

So anyway, The Naked Face. This is an older Sheldon book and it really shows: in some ways The Naked Face is quite dated (in language and the idea that homosexuality is something that needs to be/can be cured through psychology/psychiatry). But it's still a Sheldon book, and I have generally liked his books, so I wanted to give it a try.

The Naked Face is about Doctor Judd Stevens, a successful psychoanalyst. When one of Stevens' patients is killed, almost immediately followed by his receptionist, one of the detectives assigned to the case (a man whose partner was killed years ago in a case where Stevens' examination allowed the killer to live) believes that Stevens is the one responsible. Stevens has to figure out who the real killer is before the detective arrests him for murder.

The Naked Face was a really fast read (it's about 300 pages long and I finished it in a day AFTER reading Jonathan Livingston Seagull). It was also a lot of fun trying to figure out who the killer was, although that was tough - you don't actually get the full story until near the end, when Stevens himself figures it out. This is made even harder because you don't actually MEET the killer until near the end of the book. But I was happy that the plot wasn't predictable, and overall I really ended up enjoying The Naked Face.
Posted by Shauna at 11:34 PM

I do have to say though, I really liked Detective McGreavy. He reminded me of a character I wrote a few years ago - the hardlined detective who doesn't take shit from no one. He was a great antagonist (even though he wasn't the actual main antagonist, which I'm glad about: if he had been it would have been too predictable!)