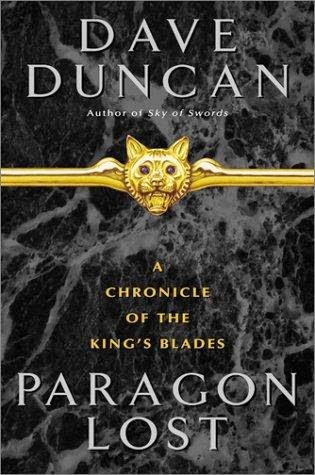 I read Dave Duncan's King's Blades trilogy many years ago and really, really liked them.  Over time, I acquired book five in the series (Impossible Odds) without realizing it was book five.  So when I went to read it, I decided to read book four first, which luckily the library had.  Apparently I didn't have to because books four, five, and six are standalone stories which can be read in any order.  But once I had my hands on Paragon Lost, I decided to read these three in order anyway.

Paragon Lost is the story of the disgraced Blade Beaumont.  Beaumont has been working as a fencing instructor at Gossip's Corner, an inn.  The Blade's Grand Master discreetly pays him a visit, telling him that a Blade has been stolen and Beaumont is the only one who can get him back.

At this point, the narrative goes back to the past, showing what led to Beaumont's disgrace.  Beau and two other Blades, Arkell and Oak, were given to the King's trusted friend Lord Wassail for a secretive and dangerous mission.  They were to travel across the world to Skyrria to bring back the new queen of Chivial.  Unfortunately the new queen is the sister-in-law of the autocrat of Skyrria, Czar Igor.  Igor is a mad ruler, given to kill people on a whim.  And Igor wants to know the secret of how the Blades are bound because he wants to make his own. And he may not let the four leave his country without giving him that secret.

Unfortunately, Paragon Lost wasn't as good as the original trilogy, at least as I remember them.  I had a really hard time getting into Paragon Lost, rereading a couple of early pages several times.  It was only after I realized that the Grand Master who had come to call on Beau was the same Durendal from the previous trilogy that I became a bit intrigued.  It still took about halfway through the story before I really felt like I was getting into it.  And once the story of what happened to Beau in the past sort of ended, the remainder of the book was just ok.  Hopefully the remaining two will be a bit better!
Posted by Shauna at 12:27 PM