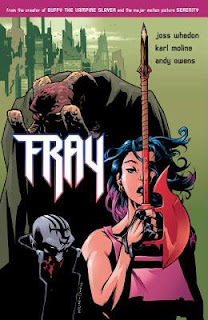 I don't remember exactly when I wanted to read Joss Whedon's Fray, but I imagine it was back in school around when I took a course on Buffy the Vampire Slayer.  Whatever the case, I've had the graphic novel since October 2012 (the packing slip from Amazon was still in the book).  So that's almost three years where I've wanted to read it but kept putting it off.

Fray is set in the same universe as the whole Buffy series, but hundred of years in the future.  Magic and demons have long been gone from the world and so no girls have been chosen to be the Slayer.  Until now.  Melaka Fray is the best grabber in Manhattan.  But when a man tells her she's the Chosen One (before lighting himself on fire) and a demon shows up in her apartment, her world starts to spin in crazy directions.  It seems that the Lurkers (people everyone thinks are just diseased) are actually really weak vampires.  And someone has found a way to both organize them AND open a portal to Hell.  To beat them, Fray needs to embrace her destiny as the Slayer.  Unfortunately she is missing a large part of her heritage - she has the Slayer's strength, but not the psychic connection to the Slayers who have come before her.  She's also not exactly a leader, which is what is needed for the coming war...

I honestly really enjoyed reading Fray. I loved how crazy she was, but also how human: here was a girl who was dealt a rather rough hand who manages to rise up to the challenges before her.  Sure, she may stumble along the way.  But that really makes her human.  I was actually rather sad when the book ended - sure the story was wrapped up.  But I really want to know what happens next!!!
Posted by Shauna at 12:59 AM