How Smart Is Your Cat? 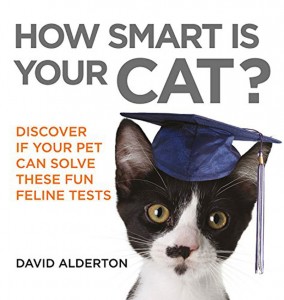 I honestly don't remember putting this book on hold at the library, but I randomly got notification about it last week.  It seemed interesting enough, so I decided to read it.

How Smart Is Your Cat? says it's devoted to seeing how smart your pet cat is.  From the description of the book, there were going to be tests to check their IQ and some instructions for teaching them tricks. Unfortunately that wasn't the case.  How Smart Is Your Cat is for someone totally new to owning a pet cat, not someone like me who has had a few feline companions over the years.  The book goes through all the basics of what cats are like.  You check their IQ by seeing how they behave, quite often with somewhat arbitrary tasks using a 3 star system.  For example, you pet scores one star for playing with different toys, two stars for playing games that you start, and three stars for playing a game that they initiate (this particular example is super relevant because it comes up repeatedly throughout the book).  Oh, or my favourite one: your cat shows interest when you are cooking (they're dumb then, only 1 star), weaves around your legs while you're cooking (slightly smarter, two stars), or routinely appears when you're cooking meat (super smart!  3 stars).  This isn't cat smarts - they're attracted to your food and want some!  Wouldn't a better idea be something like: they're begging for food (1 star), they watch you cook but don't actively try to get anything (2 stars), and they don't care that you're cooking because they know they won't get anything from you anyway (3 stars)?  Yeah, a lot of the examples of cat intelligence were routine based and kind of silly.

Another serious flaw with the book was the section on outdoor cats, as it advocates letting your cat roam free.  This is not a good idea in modern cities because cats can get into fights, run over, poisoned, or eaten by bigger predators.  I am a big proponent to letting my cats out on a leash (with supervision whenever possible!).  This book devoted two pages of the about 30 to leashing your cat, and that was only in regards to walking him or her.

So basically, if you're a total beginner, this book is fine.  But anyone who has owned a cat for a few months or more will probably not benefit from this book.
Posted by Shauna at 5:04 PM