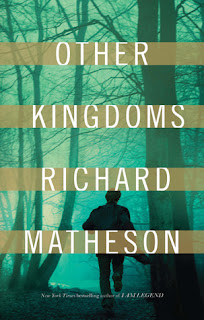 I've been wanting to read Richard Matheson's Other Kingdoms for quite awhile now.  So after finishing Money Mindset and a few Macleans magazines, I decided it was the perfect book to finally get to.  I started reading it sometime last night, and finished it this afternoon.  It's a super quick, easy read.  One that sounded exactly like the type of thing I would really like.  I'm going to let the book's blurb do the talking for me here:

1918. A young American soldier, recently wounded in the Great War, Alex White comes to Gatford to escape his troubled past. The pastoral English village seems the perfect spot to heal his wounded body and soul. True, the neighboring woods are said to be haunted by capricious, even malevolent spirits, but surely those are just old wives’ tales.

At least that's what the back of the book says.  The Goodreads page goes on to add:

A frightening encounter in the forest leads Alex into the arms of Magda Variel, an alluring red-haired widow rumored to be a witch. She warns him to steer clear of the wood and the perilous faerie kingdom it borders, but Alex cannot help himself. Drawn to its verdant mysteries, he finds love, danger…and wonders that will forever change his view of the world.
Other Kingdoms casts a magical spell, as conjured by a truly legendary storyteller.

The back of my version of the book made this sound like it was going to be an awesome ride through the woods with some terrifying versions of faeries chasing after Alex White.  I was pretty excited for it because I really liked the idea of seeing the more horrific version of the fae.


Okay, so let me give you a little more of this story (warning - major spoilers follow).  Alex makes his way to Gatford after a friend in the trenches tells him to go there with his dying breath (while also telling Alex to sell his gold and buy a cottage there).  Having himself gotten a war-wound at the same time, Alex decides he might as well track Gatford down (because nothing is waiting for him back home except the father he loathes).  Despite its hidden location, Alex manages to find it.  Alex quickly finds himself a party interested in the gold and rents himself a small cabin.  Life seems alright (other than the leaking roof, which is quickly repaired by Joe) until Alex takes a walk into the woods and steps off the path.

The first time it happens, he hears voices in his head.  The second time is when he is rooted to the spot, about to be trampled, only to be saved by Magda.  That's the point when he is led into her arms and they become lovers (even though he is many years her junior).  Their relationship is a strange one, made all the more so by Alex's increasing fear.  So when she leaves for a few days, he takes another wander through the forest and meets Ruthana, the angelic faerie girl who immediately captures his heart.  She saves him from her brother Gilly, who attacks again (although Alex does not see him).

This event leads to a sundering of his relationship with Magda.  Magda returns home and Alex no longer wants to have sex with her (even though he hadn't really wanted to for some time previously).  Magda realizes that his encounter with the faerie girl has changed his feeling for her, and orders him out of her house.  He returns to the cottage he was renting to endure two nights of terror.  After the first one, Joe appears, bringing Alex some food.  He gives Alex some advice for stopping the faerie attacks (because that's what they have to be, even though Alex refuses to believe that his Ruthana could do such a thing; I should note that both Magda and Joe made mention of the fact that Alex never saw Gilly, and so believed Ruthana was tricking him that she even had a brother).  Alex attempts this, but nothing works.  Determined that it must be a witch attack of some sort, Alex goes to confront Magda, who is highly insulted and upset that Alex would think she would do such things to the father of her child.  Yes, they have been having unprotected sex for awhile now, so of course she is with child.

They reconcile, and Alex moves back into her house for awhile.  But then a dream of Ruthana desperately trying to tell Alex to come back to her results in him returning to the woods.  He asks her about the attacks and she tells him that those are witch attacks; faeries are not capable of such things.  She introduces Alex to Gilly (ordering Gilly to leave Alex alone).  They make love in a pure (they made love, not lust...it was non-carnal) way.  Then Alex decided he had to go and say goodbye to Magda properly before running off with Ruthana forever (Magda is having his child afterall).

Well, things go badly.  Magda had already gotten rid of the child because it was going to be a girl, not the boy she wanted.  And she tries to take off Alex's head with a machete.  The only thing that saves him is some powder Ruthana had given him to protect himself with; it made Magda blind.  He then runs off into the woods to live happily ever after with Ruthana.  They marry and she is with child.

All is not well of course though.  Gilly keeps trying to kill the Human Being who lives among them.  Magda also attacks Alex by shapeshifting into a griffin (and kills herself somehow - I really did not understand how that happened).  But then the worst thing in the world happens - the shrinking potion he had used earlier to live among the faeries was wearing off.  Alex wanted to use another one, but the faeries said no, it could kill him.  So he was banished from their world (which for some reason meant leaving Gatford too, for some reason I could not fathom.  Couldn't he have just stayed there and lived near Ruthana?  Oh wait...he managed to alienate the villagers while he was there because he was an ass to almost everyone he met there).  And Ruthana dies of a broken heart a few months later.  But Alex lives to the ripe old age of 85.  Long enough to finally drum up the courage to narrate this whole tale at the age of 82.

Yes, that was honestly the end of the book.  It was really anti-climatic.  And didn't at all have the horror feel I thought it was going to have.  Sure, the beginning started out with that feel.  But Other Kingdoms became very much a love story before part two (out of three parts) was over.

And the I'm not entirely sure how it became a love story either.  I mean, of the women who wanted Alex, Magda's motivations made a perverted sort of sense.  Alex himself said that she wanted to replace her dead son with him (and that he played the part for her perfectly).  Ruthana was the one who was truly and madly in love with him.  But why?  She was never given a reason for this love (beyond maybe love at first sight?)  So that made this latter half of the book all the harder to swallow.

I do want to say though, the fact that an 82 year old Alex was narrating the story made it rather interesting.  Sure, it was tedious at times, as other people pointed out (he pointed out alliteration EVERY. SINGLE. TIME. IT. HAPPENED.)  But it was still an interesting (if not entirely successful) way to frame the story.

And as much as I wasn't a fan of the ending of the book, I do not regret reading it.  Other Kingdoms hooked me in pretty quickly and was interesting enough to keep reading (and read really fast!).
Posted by Shauna at 4:53 PM