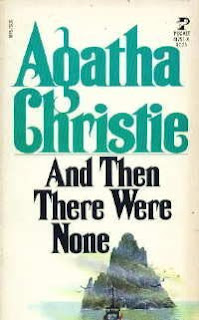 This masterfully put-together story is actually the first book of Christie's that I've ever read.  I can easily see why this book is the world's best selling mystery novel.  And if her other mysteries are of a similar caliber, it's no wonder her work is still beloved today.  I highly recommend And Then There Were None; while a little bit dated, it will keep you guessing right to the end as to how the whole plot was pulled off!
Posted by Shauna at 9:57 PM