In Celebration of Lammas Night 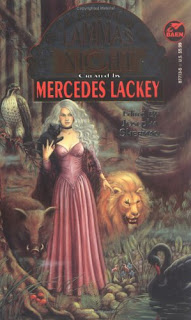 I can't remember exactly why I wanted to read In Celebration of Lammas Night.  But a long time ago I thought it sounded great and ordered it from online.  Then a few weeks ago I decided to finally give it a read.  The idea of this anthology is that Mercedes Lackey wrote a ballad a long time ago about a lady wizard who stays in the house of a male wizard who passed away.  Her presence awakens the spirit of the male wizard, who courts her.  In one of his spell books she discovers a spell to banish him.  But on the next page is an identical spell that has one different word; this second spell will bring him back to life instead.  Both spells must be cast on Lammas night.  And so she must choose.  Lackey's friends loved the ballad, and originally decided to write endings to it (the original song is ambigious).  But then they decided to write full stories instead and collect them into this anthology.  The whole thing sounds rather like Apocalypse Madness, so I was definitely intrigued as I began reading.

Unfortunately, these stories weren't really inspired by the ballad; almost all of them were the ballad in prose form.  They don't really add much to the story except maybe choosing whether to bring him back to life (most of them) or banish him (a few).  It makes the whole anthology a very tedious read.  So tedious that I had to split it up with stories from a different anthology a bit, just to make it through.  The absolute worst one was actually Lackey's own story, because it literally was just a prose version of the ballad, right down to ending without making a choice.  I usually love Lackey's writing, so this was extra disappointing because it was from her.

I have no intention of going through all of the stories because really, they're basically the same thing.  A few of them made the lady wizard Miranda from Shakespeare's The Tempest ("Miranda" by Ru Emerson and "Miranda's Tale" by Jason Henderson).  That was interesting the first time, but I was bored of it when it came up again (even though the second story was arguably the better of the two).  A lot of the stories also had unnamed characters, which was rather annoying.  Stories with named characters tended to be better.

The highlights of In Celebration of Lammas Night were "Demonheart" by Mark Shepherd because it was told from the male spirit wizard's perspective (he was a slave to a demon named Demonheart who wanted the two of them to mate so it could claim their child's body).  "Sunflower" by Jody Lynn Nye was interesting because there was no external evil; the lady wizard's choice was completely due to the spirit wizard's character.  "Summer Storms" by Christie Golden was awesome because it didn't end with her making a choice; I wish it had been fleshed out into a full novel.  "The Captive Song" by Josepha Sherman had a very interesting twist to it that I enjoyed (she was courted by both a demon and a wizard and ended up choosing to bring the demon back because he was war weary like she was).  "Midsummer Folly" by Elizabeth Waters was a lot of fun!  A betrothed wandering mage ended up bringing the spirit wizard back for someone else.  What's more, he had lied to the woman who loved him, so she brought him back with the caveat that he needed to treat the other woman right.  "The Mage, The Maiden, and the Hag" by S.M. Stirling and Jan Stirling was easily the best of the lot.  This one had the lady wizard possessed by evil; the evil curses the male wizard to die.  It was so good, that I went and bought S.M. Stirling's short story collection on my Kindle after finishing reading it!  "Circle of Ashes" by Stephanie D Shaver took place in what felt like a very detailed world.  I would love to read a full novel set in this world (unfortunately nothing exists yet). :(  And "Lady of the Rock" by Diana L Paxson was set in our world, which made for a very interesting take on the story.

While these eight stories were good, the other ten were not that great.  Coupled with that was the fact that even regarding the good stories, I was basically just reading the same story over and over again.  Some versions may have been great, others good, but most were mediocre.  Overall I found this anthology disappointing and didn't really think it was worth reading (although I found out about S.M. Stirling so that was a plus!)
Posted by Shauna at 11:55 PM