The Call by Peadar O'Guilin 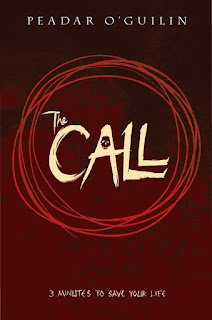 A friend from work recommended Peadar O'Guilin's The Call to me a little while ago.  I had it on hold and should have gotten it last week, but I didn't get it until yesterday.  But even though I was hoping to have it finished long before now, it was fine because I totally read the entire book last night.  I started it sometime between 10-11pm.  By about 3:30am I was thinking I should just stop and finish it tomorrow, but I kept going back to it, to the point of jumping into bed and picking it back up to finish it.  I think I was done sometime around 4:30am (so really, it's an easy read - over 300 pages in around 6 hours.  But it's YA, and YA tends to be easier to read).

The Call has a very interesting premise.  Teenagers in Ireland disappear for exactly 3 minutes and 4 seconds.  During that time, the Sidhe call them into the Grey Lands and hunt them.  What is 3 minutes here is hours there.  Only one in ten children return alive (which is greatly improved odds from the one in one hundred that it was before the whole country started training them to fight and survive).

Nessa is one of the teenagers of an age when she will be Called soon.  No one expects her to live because her legs have been damaged by Polio.  But Nessa is determined to prove everyone wrong.  She will find a way to survive when the time comes.  And so she follows all the rules and learns EVERYTHING she can about the Grey Lands, the Sidhe, and the people who have survived their own Call.  She's determined that nothing will get in her way.  Not even her feelings for Anto, the cute boy she loves.

The Call follows Nessa and her friends (and enemies in the case of Conor and his Knights) through a part year of school.  I really liked how when pretty much any of the teens gets Called, the book swaps to their point of view so we get to see what happens (and learn so much more about the Grey Lands than we would otherwise have).  There's a lot of Irish mythology in it, which made me want to read the Mabinogion (which I really should have just done years ago!)  I was also really glad I read The Tain back in school, as well as The Black Cauldron because characters like Cu Chulainn and things like the Cauldron came up in The Call (and I knew what they were!)

I have to admit, I loved when Conor got Called because that chapter read like an epic tale.  He was compared to Cu Chulainn with good reason, as he slaughtered Sidhe left and right.  Compared to all the other Calls, it was so different (and he was the only one who wasn't at all afraid).

I do wish I had a little more information about the Sidhe's side of things.  What was the treaty they signed that condemned them to the Grey Lands?  How did they manage to isolate Ireland from the rest of the world?  Hopefully we'll get the answers to all of this and more in the sequel that's apparently forthcoming!
Posted by Shauna at 11:14 PM