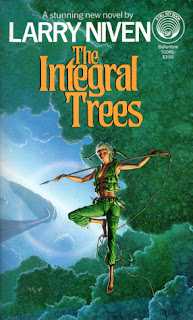 Wow was this a bit of a rough read.

I got Larry Niven's The Integral Trees back a few years ago, at a Toronto convention.  Someone had ranted and raved about it, then I found a copy of it on the trade floor. After I finished reading Witchling, I wanted something different.  I debated between The Integral Trees and Ringworld before ultimately choosing The Integral Trees.

The Integral Trees takes place on this world that has no real ground: the atmosphere is a giant smoke ring in orbit around the neutron star, Voy.  In the smoke ring, the thickest part of the atmosphere where life can exist, there's clumps of water and plants.  Most of the plants are fragile and thin; the exception are the huge integral trees, which grow hundreds of kilometers long.  It's on these that humans, the descendants of a starship mutiny, now live.  With the exception of the humans, all the life in the smoke ring has evolved to fly because there is no ground; even the plants are capable of moving about to some degree.  The humans have only been here about 500 years, but they too are adapting: they are now taller than us (because they grow up with less gravity) and some have prehensile toes which are capable of gripping things as another pair of hands.

I'll admit, I didn't figure out about the height of the humans until it clicked when they were talking about a dwarf character - the dwarf was small enough to fit into a spacesuit meant for one of us....he was small because he was our height.

So anyway, the humans live in the tufts of the giant trees.  The trees have no root structure, just a tuft of branches at either end.  The humans who live in Quinn Tuft have sent a party of people, made up of cripples and people the Chairman of Quinn Tuft doesn't like (like Clave, his rival and son-in-law, the Grad, who is the Scientist's apprentice, and Gavving, who just happened to go on an ill-fated hunting expedition that got the Chairman's son killed), to go on an expedition.  Their village has been in a drought and they are sent to gather food and renew the tribal marks along the trunk.  our adventurers find evidence that the other side of the trunk has another tribe who is still alive; the two sides get into a fight.  During this time, the tree cracks in half, sending Quinn Tuft out of the smoke ring, and the other side back into the smoke ring.  Most of our party, plus one of the women from the other side of the fight, manage to jump free of the trunk.  They collect everyone and sail through space on a piece of bark hooked to a flying alien whale.  The whale leads them to a jungle, where they see two different peoples fighting.  Most of the Quinn Tuft people get captured by the side who has an ancient spacecraft (but one lady who is crippled and Clave, who had a broken leg, get left behind).  The Quinn tribe are further separated at their captor's tree - they are put into slavery and separated based on whether they are men, women, or pregnant women.  The Grad ends up going to the new tree's Scientist (at the Citadel), where he is made a second Scientist Apprentice (much to the annoyance of the current Scientist's Apprentice).

While the Quinn Tuft slaves think of rebellion and try to organize themselves (which is tough because they are separated), Clave and the jungle people plan an attack on the tree.  The entire jungle can move once every 20 years, and the time is now.  They attack the Citadel and manage to capture the spacecraft (thanks in part to the Grad being in the spacecraft at the time and murdering the Scientist).  They save who they can, then accidentally take off into space. The AI on the original spacecraft manages to make contact with them briefly, telling them what to do to get back into the smoke ring.  Then everyone in the spacecraft (which includes a couple of jungle people and a few people from the tree that took everyone captive) settles on a new, younger Integral Tree.

Niven is a hard-science fiction writer.  I wasn't really prepared for what that would mean.  In this case, the first few chapters were really front loaded with heavy hard-science.  There were some helpful pictures to aide in understanding what the world was like, but it still took me a bit to get some of the science.  But that's okay, I understood the basics well enough.

Then the actual plot started happening.  There were way too many characters with similar-sounding names.  In the main group alone there was Jinny, Jayan, and Jiovan; I kept getting confused about who was talking (although in the early part of the book, it was pretty much always Jiovan).  There were also just way too many characters.  The main group that started out from Quinn Tuft had like ten people.  While people came and went, the final group who colonize the new tree had like twelve.  There were also random people coming and going through the rest of the book; keeping everyone straight (while juggling similar-sounding names) was rough.

The story itself was also kind of boring.  The stakes at the beginning didn't seem very high - the only person who suspected the tree was dying was the Grad, and he never really shared much information except under extreme duress - everything was classified).  None of the characters had real character (in the example of Jiovan, he didn't really sound different to me from any of the other characters.  His distinguishing feature was that he had only one leg.  That's not at all helpful in dialogue).

All in all, I felt that you read this book for the science and worldbuilding, not for the actual story, which makes me sad.

Oh, as a side note, I discovered that this is Book 2 in Niven's series about the State.  I had no idea there was a book that came first.  The first book has nothing to do with the smoke ring though, so that's probably why people were talking about The Integral Trees instead.
Posted by Shauna at 1:12 PM