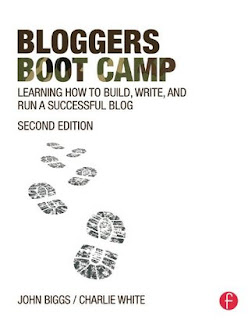 I've had multiple blogs (including this one), but lately I've considered starting a *serious* blog (by that I mean a blog that I update more frequently and will hopefully make me a bit of money on the side). So when I saw Bloggers Boot Camp: Learning How to Build, Write, and Run a Successful Blog by Charlie White and John Biggs go by at work, I thought it would be a good idea to give it a read. It was a bit of a funny feeling because I feel like a total beginner in blogging, even though I know I'm not (since I've dabbled multiple times with different blogs).  I'm a little worried about the time commitment and whether or not I will have enough to say to sustain the blog long term.  So when I started reading Bloggers Boot Camp, I almost had a panic attack because White and Biggs recommend you post multiple times A DAY.  That's a lot more than I was thinking (I was thinking of a few times a week! I'm going to have to reassess that I guess).

Biggs and White have been blogging for over a decade each.  They wrote Bloggers Boot Camp to share their blogging wisdom with people wanting to learn more about blogging.  They have some fantastic tips to share and gave me a whole lot to think about.

Most of their blogging has been for tech news sites, so Blogging Boot Camp is geared 100% towards creating a news magazine.  Biggs and White believe that all bloggers are journalists (just without the large newspapers/companies to support them).  So they give you tools to help you succeed as such.

One major problem with this book is that it is a bit out of date.  That's not surprising since the world of the internet changes so quickly.  Their advice is still sound, but some of the sites they mention may have changed or become nonexistent in the last four years.  So be aware of that if you give Bloggers Boot Camp a read.
Posted by Shauna at 5:54 PM