The Year of Less: How I Stopped Shopping, Gave Away My Belongings, and Discovered Life Is Worth More Than Anything You Can Buy in a Store 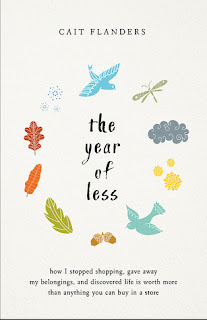 I don't actually remember putting The Year of Less by Cait Flanders on hold at the library. But the subtitle made the book sound interesting: I wanted to know how she managed to stop shopping for a year, and also about her giving away her belongings (I've been decluttering on and off for the last few months, so hearing about how someone else dealt with things interested me).

I got the book on Monday.  I read the entire thing that night (it's pretty short - only like 216 pages). And I'm honestly not really sure why I did.  I wasn't overly engaged with what was going on (this review by Rhonda on Goodreads actually sums up my feelings rather well). It was late when I finished reading the book, so I was going to write about it on Tuesday.  But I forgot about it until now because I honestly didn't care about the book at all - it was really forgettable. :(

The Year of Less does give an overview of Cait starting her shopping ban.  She comes up with rules for it - what she will let herself buy over the course of the year of her ban, with everything else not allowed.  She also starts purging her belongings around this time.  That wasn't very exciting because she apparently isn't attached to things at all, so there was no struggle to get rid of anything.

The majority of the book isn't really about her giving up things though...it's more about her addictive personality and her past (including alcoholism and her weight struggles), her travelling (she goes travelling a lot with the money she saves), and about the impending divorce her parents are suddenly going through.  The stuff around the divorce was rather unfortunate from a writing perspective - Flanders paints herself as the victim (she is depressed by her parents' impending divorce to the point of being unable to deal with life), plus the book ends with the divorce still ongoing (except for a little note in the conclusion or epilogue or whatever it was at the end of the book).  I'm currently reading Naked, Drunk, and Writing by Adair Lara (I've been reading it on and off for the last few weeks because I'm currently interested in personal essays) and making yourself the victim and not having a satisfying ending because you're still struggling with the events in question are big no-nos for writing memoirs.  It's also rather unfortunate, because The Year of Less could quite easily be about Flanders coming to terms with the divorce, rather than all the other things in the book.  As it is, The Year of Less is, unfortunately, a very surface-level book.  It's a very forgettable read that's not really worth your time.

I should add that at the end of the book there's a bit of information about doing your own shopping ban.  If you're interested in doing your own, you might want to check that part of the book out.  But it's honestly pretty common-sense.  And if you really needed tips, you can just google something like "do your own shopping ban" instead of perusing The Year of Less.  Heck, Flanders' site is the top result of that Google search, so you can just read her short post about it there if you want, it's got all of her rules.
Posted by Shauna at 12:57 AM