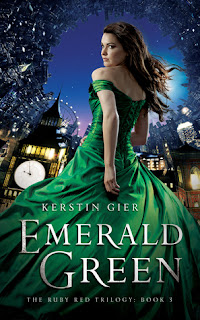 I'm getting a bit ahead of myself.  I just finished Emerald Green a little bit ago.  Like Sapphire Blue, Emerald Green picks up right where the story in the last book left off.  Thankfully Gwen has decided to stop moping over Gideon making her fall in love with him, so the plot can actually go somewhere in this book.  Gwen has the help of her best friend, Lesley, and the gargoyle demon Xemerius in the present to help her figure out what's going on, and her grandfather in the past.  Together they discover the hidden location of the missing chronograph (the one that Lucy and Paul stole years ago and hid in the past).  So now Gwen is able to travel back to the past unsupervised by the Guardians. Which she uses as much as she can to try to unravel the mystery of what exactly the Count Saint-Germain is up to!  Unfortunately time is not on their side, since the Count has a strict time table; he keeps sending instructions back to the modern Guardians through Gideon.  And the Guardians are not about to risk anything since they're so close to seeing the Circle of time-travellers closed!

Oh yeah, and in the middle of all this, Gwen and Lesley still need to fit in going to the birthday party that one of their classmates is throwing.

Okay, I'm going to add a spoiler warning here, because from here on out I will be ruining the ending of the book.  If you don't want to know what happens, please stop reading here.

So anyway, Gwen and Gideon complete the circle on the stolen chronograph (because Gideon's blood was all that was needed - Gwen's grandfather made sure her blood was added to it in the past so when they found it in the future she would be instantly able to use it).  They go about meeting with Lucy and Paul (who, surprise surprise, happen to be Gwen's real parents.  That was super obvious from the first book, but whatever) to try to outmaneuver the Count.  Everyone assumed that the Count had a modern day man on the inside of the Guardians Inner-Circle, but they come to the realization that wait, it could be the actual Count!  What if he was immortal in the past, and his immortality disappeared when Gwen was born?  (I don't know how that even makes sense, but whatever).  Gwen and Gideon still go to the preordained meeting with the Count in the past, where he drugs Gwen after Gideon is forced to leave (he was only invited for 15 minutes, while she had to stay 3 hours.  I thought that was stupidly suspicious, but whatever, he says jump and the Guardians ask how high).  She awakens in the present to discover the identity of the Count after he incapacitates the Guardian's doctor somehow (I don't really know or care how).  He is disappointed to realize that Gwen is up (I think he tried to poison her, but she's immortal so that didn't work).  He tells her to kill herself or he will kill Gideon when he shows up.  She doesn't so he shoots Gideon.  The doctor wakes up enough to knock the Count out somehow, then goes back to being incapacitated.  And it turns out Gideon used the stuff they got out of the chronograph when they completed the Circle so he's immortal, too.  Now the two of them (and Xemerius) can live out their days together forever.  The end.

Oh, and the butler at Gwen's house may be her younger brother.  Because time travel.

The end left me with so many questions.  If tons of people knew Gwen's destiny to be a time traveller, why didn't SOMEONE try to prepare her along the way.  I mean her grandfather knew.  And even the freaking Count knew because he was in the present but had met her in the past.  (Not that anyone admittedly cared what the heck she did in the past.  She sang a modern song at the soiree in Sapphire Blue and only Gideon was outraged, not the Count).  But seriously, why didn't her grandfather teach her history or something?

Also, why did the prophecy say Gwen had to die?  If Gideon became immortal from using the stuff from the chronograph, why couldn't the Count have just used the other one, been immortal, and went to Brazil like he planned?  He could have done that and left everyone else alone in England.

Gwen changed the past in this book kind of heavily, too.  She had a ghost friend who haunted her school, who was alive during the ball the Count wanted her and Gideon to attend so badly (this ill-fated ball was actually where she time travelled to one of the first times and saw herself; she also gets fatally stabbed and realizes she is immortal).  She talks Gideon into going back in time (in the middle of way more important things, by the way.  They only have a few hour quota of time travel for the day before they feel like crap, so this really could have waited for another time), and inoculating her still-living friend (who doesn't know her back then) so he will not die of smallpox.  He goes on to live a happy life and never becomes a ghost.  Wouldn't that change history?  Like his house becomes the school when he is a ghost...how do we know it still would have?  *sigh*

I should note though that this book really annoyed me because it left out scenes and conversations I wanted to read in favour of stupid other scenes.  Like it cuts off when Gwen admits to Lucy and Paul that she knows they are her parents, and jumps to the stupid party scene which pretty much had no point.  It showed Charlotte (and the whole freaking party) getting drunk, and Gideon talking her into going home, but that was literally it.

So even though I have these complaints, I still enjoyed reading Emerald Green well enough (and I thought it was a whole lot better than Sapphire Blue because Gwen wasn't strictly thinking of Gideon for the whole book - as I already said, Emerald Green actually had some plot going on with Gwen a little more engaged in what was happening). There were some fun scenes with the rest of Gwen's family - her siblings, mom, and great aunt were great and all really loved her (and Mr. Bernard was always there for her as well).   I think this series is the type of thing that you really need to not think too hard about (otherwise it falls apart).  I'd call it fluff or mind candy; it's kind of a guilty pleasure sort of read, where you just go along for the ride.  That being said, the middle book of the trilogy is a real drag, and honestly a lot of people probably won't care for Gwen and/or Gideon.  You'll have to make up your own mind as to whether or not you want to read the Ruby Red Trilogy.
Posted by Shauna at 4:10 PM