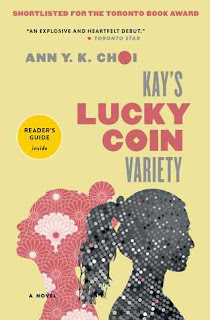 I had the opportunity to interview Ann Y.K. Choi for work, so I decided to give her debut novel, Kay's Lucky Coin Variety, a read.  The book was out from the library though, so I wasn't able to read it until after doing the interview, which is a bit of a shame because there are some questions about Kay's Lucky Coin Variety that I would have loved to ask.

Kay's Lucky Coin Variety is the story of Mary, a Korean immigrant to Canada who is named Yu-Rhee (but was forced to change her first name to attend Canadian school).  Mary's family came to Canada to pursue a better life and Mary now feels trapped beneath the weight of her parents' (particularly her mother's) expectations.  Set in the 1980's in Toronto, Kay's Lucky Coin Variety follows Mary through her teen years and into young adulthood, through first love, tragedy, and through her struggle to be her own Canadian woman when her mother wants her to be a good Korean woman.

I found Kay's Lucky Coin Variety got off to a rather slow start.  I'd say it wasn't really until about half way through the book that it seemed to pick up steam.  The beginning seems like a bunch of almost unrelated incidents that Mary talks about (which eventually lead to her being sexually assaulted in her family's store).  From there her grandmother in Korea passes away, so she goes with her mother to attend the funeral.  Her mother typically doesn't talk about the past or her feelings, but she ends up opening up a few times while in Korea (the last time more to a stranger from Canada who later becomes her best friend).  I guess as a result, Mary is kind of left in her own world looking at things rather selfishly because she honestly doesn't know what her mom is thinking in most cases (besides that her mom wants to maintain reputation, particularly of her store).

In Korea, Mary meets Joon-Ho, who is asked to show her around.  Joon-Ho was educated in England and so speaks English with an English accent.  He later comes to Canada to attend university, taking a master's degree in engineering.  Mary's family is asked to help him out because he has no family of his own there.  He spends a lot of time with Mary (she ends up asking him to her high school prom because one of her girlfriends, who was supposed to be going dateless, ended up asking her boyfriend along); Joon-Ho is the one she eventually loses her virginity to.  She doesn't realize it at the time, but Joon-Ho intends to marry her one day; Mary hates the idea because he is Korean and she is trying to escape her Korean roots.

Everything is complicated because Mary is also in love with her grade nine English teacher.  She harbours a crush for him through high school.  Once she has graduated, one of her friends gets her his phone number and she ends up calling him.  They meet, and slowly end up secretly involved with each other.

Things start to come to a head when Joon-Ho's parents come to town, which brings their potential marriage front and centre.  Mary walks out on the engagement dinner and tells Joon-Ho to leave her alone.  She finds evidence of him stalking her, and when he goes to confront it, he confides that he is being charged with plagiarizing his papers in school.  He begs for her help, telling her how his dad got him into the school with falsified information.  Mary agrees to help and to keep his secret from her family and the larger Korean community, a decision that she will come to regret.

Kay's Lucky Coin Variety is, all in all, a coming of age story told through the lens of an immigrant family.  While it took a long time to really get into the story, I found that I enjoyed it in the end (and I liked learning about Korean-Canadian culture in the 1980's).  I did find myself wishing there was a glossary of Korean words included in the book - I had a bit of a hard time remembering which word went with which aunt.
Posted by Shauna at 5:51 PM