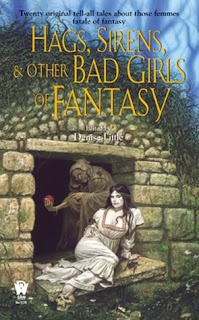 I bought Hags, Sirens, & Other Bad Girls of Fantasy many years ago, whne I was in school. I wanted short stories to give me a break from reading psychology text books. Life didn't exactly turn out how I'd planned, so Hags, Sirens, & Other Bad Girls of Fantasy (and most of the other anthologies I bought at that time) remain on my bookshelves (and on The List). While looking at my books, trying to decide what to read after Empire of Sand, I thought I'd give this a whirl.

The premise behind Hags, Sirens, & Other Bad Girls of Fantasy is fun: this is supposed to be an anthology of stories dedicated to the bad girls of fairy tales and mythology, because "bad girls have more fun" and they "have their real world competition beaten, hands down, both for outrageous behavior and for sheer, unmitigated gall" (those quotes come from the introduction by editor Denise Little). Unfortunately the vast majority of the stories in this volume didn't live up to Little's hype.

It started with "Shall We Dance" by CS Friedman, which was an odd little tale about a bewitching mystety woman who preys on alpha males, making them into shadows of themselves before abandoning them for the next alpha. This one was odd because the mystery woman spoke no words (the story was narrated by a guy who saw her destroy his friend), but it did have a bad girl. Then we had "Bitter Crowns: a Tale of Crownland," which was the first story that left me wondering why it was in this book. The story is about a female lawgiver who travels around and dispenses justice (rather like a Herald of Valdemar); she encounters a serpent from her past who traps women in trees so they can create blood fruit for it. While interesting, there were no hags, no sirens, and no bad girls. This happened again and again, with tales that either had no bad girls, or bad girls who were really good girls doing bad things. Of the 20 stories in this book, only about 5 of them had an actual bad girl doing bad things. The winner on that score waw probably "Black Annie" by Jean Rabe, a brutal tale of a hag who slaughters a village because they killed a cat in an attempt to lure her out.

The stories I enjoyed were "The Light of Ra" by Phaedra M. Weldon, which was about Isis, Set, and Osiris, "Mother of Monsters" by Greg Beatty, which was said to be one of the really good stories of this volume by other reviewers, "Lilith" by Peter Orullian, another one listed as really good, and "Heart of Stone" by Scott William Carter, which tells of how Medusa learned to love.

I know that anthologies are really hit and miss, but I found it to be a real slog to get to the better stories in this volume. I almost didn't finish reading Hags, Sirens, & Other Bad Girls of Fantasy because it was such a slog. But I made it through, and now I can finally cross it off The List for good).
Posted by Shauna at 1:48 AM