Watcher of the Dark 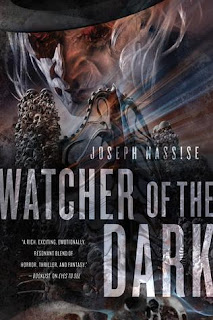 Well here we are: Watcher of the Dark, the final Jeremiah Hunt book by Joseph Nassise.

This is going to have a lot of spoilers, so be warned.

Watcher of the Dark takes place a few weeks after King of the Dead.  Hunt is on the run, not only from the Boston Police Department and FBI, but also from Simon Gallagher's forces (in order to save Denise's life in King of the Dead, he had to stab her in the heart with an ancient dagger.  Gallagher walked in right at that moment and Hunt was automatically on the run with no chance to explain himself).  Hunt's made his way to Las Angeles and is lying low in an old motel, only to find himself kidnapped by unknown assailants.  They bring him to LA's marshall, Carlos Fuentes, who threatens Denise and Dmitri's lives unless Hunt agrees to work for him.  And so Hunt finds himself working with Fuentes lieutenants: Rivera, a very powerful mage, Ilyana, a half demon, Perkins, a man able to magically find anything, and Grady, a Mundane thief.  The five of them are tasked with tracking down a mysterious magical key that has been split into three pieces.  A key that the mysterious Preacher has just decided will be the perfect payment from Hunt for his help in saving Denise back in New Orleans.  All the while Hunt is trying to find a way to get out of his indentured servitude to Fuentes without his friends getting hurt.

A lot of the plot gets driven along by Hunt (and therefore the reader) not knowing what the heck is going on.  Fuentes' lieutenants won't tell Hunt anything about the missions he's on with them, leaving him to kind of figure it out as they go along (which seemed really stupid - shouldn't you at least tell him vaguely what everyone is looking for so he has some way to actually be helpful?  Or, I don't know, what to watch out for so he can actually be on the lookout and not trigger anything/warn people if he sees stuff?)  They're also not particularly likeable as a bunch, especially through the first half of the book, making me miss Denise and Dmitri.  Sure, some of them kind of grew on me as the book went along. I think Perkins would have been endearing had he lived longer.  While I never cared for Fuentes or Rivera (they kind of made me think of mustache-twirling villains), Ilyana was also starting to become a more interesting character when she started opening up to Hunt (although I don't know how much of that was truthful).  But when Denise and Dmitri finally do show up, I still felt relieved that we're back to the people I actually care about.

What made this even worse was that at the end of the book, when Hunt, Denise, and Dmitri come up with some sort of plan to get themselves out of this mess, they also don't actually say what it is (the exact line when Hunt comes up with the plan was: "And I told them how we were all going to get out of this mess."  That was it.  Then the plan slowly gets parceled out over the next fifty pages).  I feel like this has happened in the other books, too, but it was particularly infuriating since the entirety of Watcher of the Dark was built off of withholding information.

Another thing that I really didn't get was Ilyana.  I'm not entirely sure what her entire powers were.  And a lot of what she could do seemed to make Hunt's addition to the team completely irrelevant.  She could see ghosts.  She could eat ghosts.  She presumably could see other people working magic (like Hunt could with his ghostsight).  Oh yeah, plus she was super strong and super fast. So why was he here again?

But to make it all weirder, she (and no one else for that matter) didn't seem to notice that Hunt was possessed later in the book.  Like possessed Hunt had passionate sex with her one night.  Then normal Hunt woke up confused as to why he was naked in her bed and where his clothes were.  Shouldn't she have noticed something weird with his aura or something?  Or did she notice and just not care?  I have no idea.

I'm also not entirely sure what happened with her at the end either.  She betrayed Hunt to Rivera and Fuentes.  But then Fuentes and Rivera betrayed her for some reason.  It seemed like she was going along with them, so I don't know why they needed to betray her (especially since after they did, they only took a bit of her blood but didn't kill her or anything).  Maybe they needed her as a sacrifice for a later part in their ritual that got interrupted?  But it seemed like the Gate to Hell was open already, so wasn't the ritual completed?  I honestly don't know.

But the book ends and Hunt has once again stopped the world from ending with the help of his friends.  Unfortunately the story doesn't actually end here, even though it is the last published book in the series.  The way it ended, with the FBI still searching for them, the Preacher being mad at Hunt, Gallagher's men still presumably after Hunt, and Ilyana and Rivera still out there, it makes me think there were supposed to be more books following this one.  But it came out in 2013 and there seems to be no further books in the series seven years later...

Actually, that brings me to one more question about Watcher of the Dark: where WAS the FBI?  Hunt was driving around LA, both with Fuentes' lieutenants and by himself, often in broad daylight and not at all trying to hide.  And Fuentes even calls Agent Doherty, who was Agent Robertson's protoge in King of the Dead.  Since they all believe Hunt is the serial killer known as the Reaper, shouldn't they have been all over LA looking for him, like they were all over New Orleans in King of the Dead???

Needless to say, Watcher of the Dark wasn't my favourite book in the Jeremiah Hunt Chronicles.  It kind of felt like a stepping stone to help the larger Jeremiah Hunt story along.  Unfortunately there just hasn't been any more of that larger story released to give this book more meaning. :(
Posted by Shauna at 11:19 PM