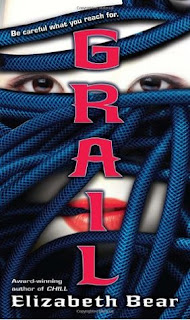 Well, here we are: Grail!  After Chill, I really wasn't sure what to expect, beyond the fact that the Jacob's Ladder was going to choose a destination.

Grail takes place fifty years after Chill.  The Jacob's Ladder has been slowly travelling towards the planet they've termed Grail.  During that time, the inhabitants have established a sort of peace.  Wars and uprisings have been quelled under First Mate Tristen.  The world has been repaired as best it can.  And both Captain Perceval and Nova have made peace with each other and their roles.

But when the Jacob's Ladder finally enters Grail's system, they discover that others have made it there, first.  It seems that humans survived on Earth after the Jacob's Ladder left a millennia ago.  These other humans have evolved their own cultures and technologies, including altering their brains, making themselves more cooperative and less competitive.  And these other humans aren't keen on sharing Fortune (their name for Grail) with warlike outsiders.

I really liked the ideas brought forth in Grail about the diverging human cultures and technologies.  When the Jacob's Ladder entered Fortune's star system, their broadcasts used old technology according to the humans already on Fortune (they had to dig up hobbyists to help them understand it).  Likewise, the people of the Jacob's Ladder spoke an outmoded language....it would be like if the people who spoke Old English diverged into two groups, and found each other now; both groups would be speaking different languages that devolved from the same source (this analogy isn't exact though, because the Jacob's Ladder humans were speaking a language that was more similar to 21st century English than the ones on Fortune, so scholars of 21st century English were still able to communicate with them).

But culturally, both groups had diverged so much; the humans of Fortune outlawed genetic modification, while those from Jacob's Ladder needed it to survive in space.  I actually liked how the humans of Fortune looked down on those from the Jacob's Ladder as barbarians, that their way was better (even though the people of the Jacob's Ladder were able to see how they weren't really so different, that what the people of Fortune had done to themselves was actually very similar to what those of the Jacob's Ladder had done to survive).  And maybe the people of Fortune haven't actually changed as much as they believe, for there is an assassination attempt against Perceval when her and Tristen are invited down to the planet to help them decide whether or not they want to submit to the necessary surgery if they are to be accepted by the colonists.  (While I wasn't planning on going into it here, Cheryl Morgan talks about the diversity within the whole series, specifically in relation to Grail and how the people of Fortune have eliminated diversity from their population.  Check it out, it's worth the read!)

Unfortunately, the fun cultural clash wasn't the only thing going on in Grail.  A murder and theft alert the crew of the Jacob's Ladder to the presence of remnants of beings they thought long vanquished (specifically Ariane Conn and Dust).  So large chunks of the book are devoted to trying to find and stop the duo.  This part of the book felt like a rehash of the earlier ones; sure, the ship is now functional, so there's no multi day adventure to the bowels of the ship.  But seeing how they were both defeated in the first book, their specters reappearing (and as much diminished versions of themselves) wasn't exactly exciting (like I said, it was a rehash).  I think a much more effective plot would have involved the Go-Backs, who, now that the ship is approaching an alien world, are trying to do everything to stop the ship from succeeding in reaching it (I used that specific example because Dorcas, the Go-Back priestess in Tristen's daughter's body, basically tries to stop the ship from infecting the planet at the end, but only because the means to do so were handed to her by Ariane, not through any agency of her own).

I should also mention that this subplot was pretty obvious.  I figured out pretty early on who Ariane was probably hidden in (Oliver Conn's body).  And failing that, my actual second guess (Chelsea Conn, because she had no character, lol) ended up being Ariane's backup plan (and the body she used to enact her ship takeover plan).

The ending of the book was also super weird.  To stop Dorcas from killing every living being on the ship (in order to save the alien planet from being infected by them), Perceval gets her to transform pretty much everything into an Angel (so much like Rien transformed herself at the end of Dust).  But then Perceval might remain in her body (but I'm not sure?  She was walking on a beach), and Nova decides to leave, but Rien wants to stay, so she does and is solid?  Honestly, I'm really not sure what the heck happened here.  But I do know that some of the colonists (specifically Amanda and Danilaw, the pair who went out to the Jacob's Ladder to meet everyone) decide they want to travel the stars as Angels too.  And some of the remaining crew (specifically Tristen and Mallory) go off together, too.

It was interesting to see how the characters had changed this time around.  With fifty years passing, Perceval has grown into a strong Captain.  Tristen is feeling the effects of his age more (he is weary of war, but will fight for his Captain when she needs him).  Danilaw and Amanda were interesting too; I wasn't sure how I felt about Danilaw at first, but it was good to have a character from Fortune who was somewhat more open-minded (although he was still a product of his culture and heritage, for he was the one who thought of those from the Jacob's Ladder as barbarians).  But he was interested in their culture, and was interested in trying to understand them (even though they terrified him because they were basically the monsters his ancestors got rid of through their "rightminding" surgery).

So now here we are: the end of the Jacob's Ladder trilogy.  I'm not entirely sure how I felt about Grail....I enjoyed it more than Chill (I wasn't bored by the halfway point), but I also didn't enjoy it nearly as much as Dust (either time I read it).  I'm glad that the people of the Jacob's Ladder didn't submit to the rightminding, because that wouldn't have been a satisfying conclusion, but the end just felt weirdly forced (maybe because it kind of just happened so quickly and was weirdly vague?  It was a good peaceful solution in its way because the Jacob's Ladder won't need to take resources from Fortune or anything else in its system, nor will it infect the planet).  And I wish there had been more of the cultural stuff and less of Ariane and Dust.

But I'm glad to have finally read Grail, finishing the series once and for all.  And I'm glad that I liked Grail more than Chill!  I just wish the series had lived up to Dust.
Posted by Shauna at 11:57 PM