Life in a Thundering Bay: Voices from Thunder Bay's Past 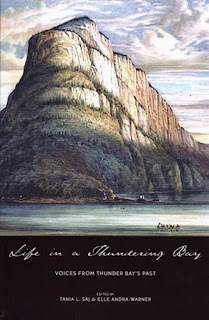 My dad lent Life in a Thundering Bay to me a few months ago.  It's a collection of stories by people who lived in Thunder Bay over a century ago.  Right when he gave it to me, I flipped through it and found JC Banks mentioned; I'd read about Banks' experience in the Great Storm of 1893 at work, so it was really neat to see him mentioned (and to actually already know about him!)

This book is a collection of seven stories, one epic poem, and an article about the names of places around Thunder Bay.  The stories are from the earliest days of the then twin cities of Fort William and Port Arthur; the editors chose stories they found particularly intriguing.

The first story is an account by Catherine Moodie Vickers of going to see Kakabeka Falls (from a letter she wrote to her mother).  At that time it was an overnight canoe trip (whereas today you can jump in a car and be there in about 20 minutes from Thunder Bay).

The second story was Fred M. DelaFosse's account of his adventuring days as a remittance man (he was relying on money sent from home to support him).  He set out from England with a friend, who quickly decided this wasn't the life for him, and so remained in Fort William and Port Arthur on his own for a year or two.  He has many adventures in the lumber camps and working on a survey team.  This story sort of reminded me of Bertie from Wodehouse's Jeeves series (if Bertie decided to go off on his own adventuring), esp the last bit "I had started in with an overweening pride of my nationality and in the belief that an Englishman was the superior of any creature on earth. I had discovered...that even in the outer ranges of civilization, there was being reared a race of men who could hold their own in the company of Englishmen or anyone else. I returned home a chastened individual" (42); that last bit about being chastened reminds me of the story in Carry On, Jeeves when Bertie had to survive on his own in a hotel without Jeeves; he learned something of what it must be like to be on your own without a servant.

From there we get a short account about the Northern Hotel by Captain Walpole Roland.  Then there was an excerpt byW.S. Piper about his search for the "Lost Mother Lode" silver mine.  This story was from the book The Eagle of Thunder Cape, which originally captured the editors' interest in these stories.  I wasn't a huge fan of this one (I felt like Piper and his friend, Edward were really just using people - they were solely focused on seeing what help those people could give them for finding the silver mine).  But then about halfway through, Chief Eagle, an Ojibway chief, visits with them in their tent and tells them some fascinating Ojibway stories about their beliefs and the Dog Lake/Thunder Bay area.  I also had no idea about the Dog Lake effigy before reading this story!

Next is a short tale from Eugenie Robin about McKay (the same man that Mount McKay is named after) and his partner Fraser bringing an Ojibway girl to Loch Lomand where she's hoping to find her betrothed.  Then there's the story about Silver Islet, and what William B. Frue did so they could mine it.  I knew some details of this story, but reading it as a whole, it's quite remarkable!  And that brings us to the final story, which is "The Great Storm" by J.C. Banks, which tells of his ordeal through the storm of 1893.

The epic poem"The Legend of Thunder - How Thunder Bay Obtained Its Name" by H.R.A. Pocock was included in a book by Captain Roland (Algoma West); it tells the legend of how how Thunder Bay got its name.  I was so surprised that there was an epic poem written about Thunder Bay!  It was quite a unique read. :)

The final article in this book was Mary J.L. Black's "Place Names in the Vicinity of Fort William."  This was super interesting!  As the editors say, it was a daunting task for her to have tracked down the meanings of some of these Ojibway words!

While the volume as a whole is quite fascinating, as with any anthology-style book, you will like some authors more than others. I also need to mention the odd formatting Tania L. Saj and Elle Andra-Warner chose; some passages were randomly bolded in the text, while others were left in normal typeset, but then bolded and set on their own page elsewhere.

It was quite distracting when it happened, especially the random bolded sections in the text.

Other than that, I did enjoy reading this book.  And now I know a little more of the history of the area. :)
Posted by Shauna at 3:17 PM