The City of Words 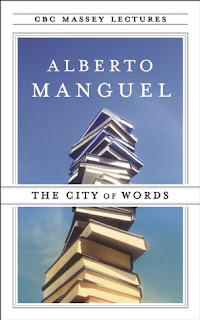 Continuing my current Massey Lecture reading spree, I picked up Alberto Manguel's 2007 Lecture City of Words from the library.  It's a fairly short book, so I thought I'd be able to breeze through it no problem.  But that wasn't really the case; I found myself mostly only able to read one chapter/lecture a night (with the exception of today where I pushed through both the fourth and fifth lectures).

In his lectures, Manguel examines several texts from different cultures and time periods, looking to see what their creators say about the societies they live(d) in.  He further draws parallels from these texts to our modern day world.

The City of Words was the first Massey Lecture that I've read that honestly felt like a lecture, particularly in the first four chapters where Manguel primarily focuses on dissecting his chosen texts.  I was on board, especially in Chapter 2 when he was discussing The Epic of Gilgamesh (which I quite enjoyed as I read Gilgamesh for fun on my own; it was interesting to read someone else's take on it. Plus, fun fact: Manguel primarily used the same translation that I read back in 2013).  But because it felt more ponderous to read than other Massey Lectures, I found myself having to read carefully and really consider what was being said.  It also didn't help that at times I felt like Manguel made leaps within an individual lecture from one thought to another which were somewhat hard to follow.

But then it all seemed to come together beautifully in the final chapter/lecture.  This was the chapter where Manguel really started examining our modern culture and how everything is being degraded by commercialism, including stories and words.  He brought back topics from the first four chapters/lectures to really drive all of this home, showing how modern North America seems to be headed for a cultural dark age similar to the decline of Latin in the early Middle Ages, thanks to this degradation (and helped massively by our cultural obsession with advertisements and slogans).  While I've suspected this might be the case for some time now, it was shocking and somewhat upsetting to have it all laid out for me so clearly.

While The City of Words is a somewhat difficult read, it is definitely important and worth reading.  I highly recommend it.