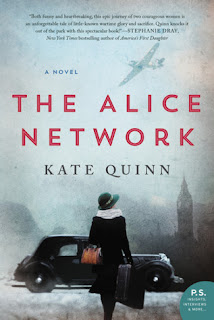 After reading both The Huntress by Kate Quinn and D-Day Girls by Sarah Rose, I decided I wanted to read The Alice Network (also by Quinn).  I didn't know much about it except that it involved female spies in the World Wars, so I figured it would be an interesting read after the non-fiction D-Day Girls (plus my dad, who has read both books, kept comparing D-Day Girls to this book).  And I really enjoyed The Huntress, and was just looking forward to an all-around good read.

The Alice Network is the story of two women: Eve Gardiner, who, as a young woman, was recruited to spy on the Germans in France during WWI, and Charlotte "Charlie" St. Clare, a young pregnant American who wants to find her French cousin after WWII.  The only clue Charlie has is the name Evelyn Gardiner.  Hence the two women's worlds collide as they come to realize they may be searching for the same thing.

The Alice Network was an interesting read.  I loved the story that took place in post-WWII Europe (mostly France).  Eve and Charlie were great foils for each other (and I loved the addition of Eve's Scottish driver Finn Kilgore).  The trio are unlikely allies who slowly discover they are more alike than they thought.  I also really enjoyed Charlie coming into her own and figuring out both what she wants and how to work the system as an unmarried pregnant woman during that time (and the difficulties she encountered were eye-opening: she wasn't able to access her OWN savings without the say-so of her father, even though the money was her's).

But I had a much harder time reading Eve Gardiner's spy adventures during WWI.  The slow back and forth between her and Rene Bordelon as she attempted to keep her cover while Bordelon kept drawing her in closer never really held my interest.  And then the scene where Gardiner's hands were destroyed, while I knew that would be coming at some point, was super graphic; I had a really hard time with that.  I was much happier when Eve's story kind of caught up with Charlie's narrative in 1947.

Like in The Huntress, Quinn's characters were interesting.  I also liked how she blended fact with fiction (and I appreciated the extras included at the end of the book, like the letter from Louise de Bettignies).

Overall, I enjoyed this book, but I thought The Huntress was better.