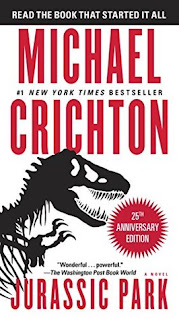 I've considered reading Michael Crichton's Jurassic Park on and off over the years.  I love the Jurassic Park movie.  I also really, really liked Crichton's book Timeline when I read it years ago (before this blog existed. I thought it was the only Crichton book I've read, but I also apparently read Next over a decade ago; I don't remember it at all).  But I never got around to it.  I think I had a paperback copy for awhile, then got rid of it.  But then a few months ago I was talking to a friend about it and ended up picking it up on my Kindle.  My friend really liked it, and recommended it as a must read for dinosaur lovers.

The movie follows the overall plot of the book fairly well, so if you've seen it, you know what happens.  Dr. Grant, Dr. Sattler, and Ian Malcolm are all invited to John Hammond's island to tour his amusement park.  The lawyer, Donald Gennaro, wanted their help in assessing whether or not to close down the park.  Hammond also invited his grandchildren to the park in the hopes that their presence would help Gennaro see the wonders the park gave to children.

The characters are a bit different from the movie though.  Lex is only 7 or 8 and a tomboy (and a very stereotypical annoying kid).  Tim is older and into computers as well as dinosaurs.  There's a PR person who takes them around on the tour.  And Dr. Settler (who is much younger than I would have thought) seems to mostly be present as an audience for Ian Malcolm's lectures.

They're also....kind of flat.  And honestly not particularly interesting people (I think because they're flat).

There's also a lot of science throughout the book.  In Timeline, I remember the science being front heavy - once you got through the first bit, the science was all explained and the story just happened.  In Jurassic Park, the science is throughout the book, often halting the story to be explained.  And it's not just one kind of science: you've got genetics, paleontology, biology, chaos theory mathematics, computer science (the book hasn't aged particularly well in regards to the technology - it was written at a time when CD players needed to be explained in detail).

Also: misogyny.  Everyone is so surprised that Dr. Sattler is a woman.  But then she gets to just do stereotypical woman things (go help take care of Dr. Malcolm while us men figure everything out), forgetting that she's just as smart as the men in the room.  It really bothered me knowing how great and active she was in the movie (a lot of the things she does in the movie are done by Gennaro in the book).

So all in all, I found Jurassic Park to be quite the let down.  But now I want to go and rewatch the movie, which I think is far better paced than the book was!