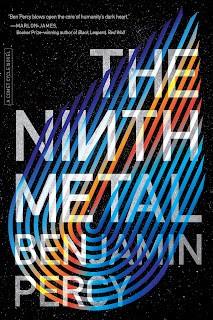 A friend at work recommended The Ninth Metal to me.  Along with saying it was a fast and entertaining read, he told me that the second book was even better.  So I grabbed it from the library and gave it a read over the long weekend.

The Ninth Metal is the story of how the world changed after flying through the debris field of a comet.  The comet debris rained down on the Earth, changing people, places, and technology for ever.  One place that was changed was Northfall, Minnesota.  The debris field that rained down on the area is mine-able, causing a sudden boom to the dying town.  Everyone is flocking to Northfall much like they did during the gold rush in an attempt to make their fortune, mining the new omnimetal, which has revolutionized the world as a self-propelling power source.

But the omnimetal isn't just a power source.  "Metal heads" are grinding it down to dust and smoking it, gaining strange visions during their highs.  And some people, like ten-year old Hawkin, are blessed (or cursed) with strange new powers from the omnimetal.

The Ninth Metal mainly follows several characters from Northfall: John Frontier: youngest son of the Frontier family, who run a mining company that is profiting from omnimetal while trying to keep other corporations out; Victoria, a PhD physicist recruited by the government for some top-secret work in Northfall; and Stacie, a rookie cop who wants to help others.  While their stories and lives seem quite discreet, slowly they are drawn together by the events that unfold in Nightfall.

While I wasn't sure where the story was going in the beginning, I quite liked The Ninth Metal.  I'm looking forward to reading the second book in Benjamin Percy's Comet Cycle, The Unfamiliar Garden, soon!