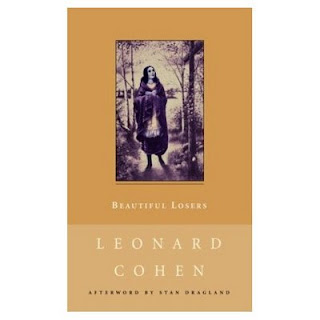 I knew I was in trouble with this book when I read the first line on the back cover: "One of the best known experimental novels of the 1960's." I know I'm biased; I like more traditional novels. You know, non-experimental types. But I had to read this for Canadian Prose, so I had to give it a shot.
Well, I did give it a shot. And Leonard Cohen's Beautiful Losers was what I thought it would be. Experimental. It is a book about this bizarre love triangle between the unnamed narrator, his wife, and his best friend. The only other character in the book of note is a Native American saint named Catherine Tekakwitha who was alive about 300 years before the other characters in the book.
The first part of the book follows the unnamed narrator. Part way through his narration, I came to the conclusion that he was insane. There were a few chapters that made no sense, but I persevered through them in case they were important to the plot. They weren't.
The second part of the book is a letter from F., the narrator's friend. The letter explains a bunch of stuff that is going on, while raising many other questions. The final part of the book is the epilogue, which is written in the third person.
Beautiful Losers is a smutty book. There is a lot of sex within its pages between all the three main characters in all sorts of combinations. But beyond the sex, there wasn't a whole lot else except for the story of Catherine Tekakwitha. (Which, in my opinion, were about the only parts of the book that were interesting and made sense). The story of Catherine Tekakwitha, as told within Beautiful Losers, seems to be fairly accurate.
By the end of the book, I had lost sympathy with the three characters within the love triangle. I was also left wondering what exactly had happened. This was a very confusing book, and I'm glad I will not have to read it ever again.
Posted by Shauna at 6:23 PM