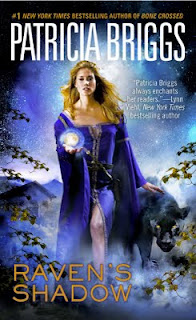 I just finished yet another excellent book by Patricia Briggs (At this rate, I'm going to run out of novels by her to read and it'll be like Terry Brooks - I have to wait each year until the next one comes out!) This time it was Raven's Shadow that I just read. Raven's Shadow is in a completely different world from the Mercy Thompson series and the Sianim books.
Raven's Shadow is the story of Seraph, a Traveller Raven mage. After her clan is killed by plague and her brother killed by townsfolk, she is saved by Tier, a soldier returning home after war. Seraph decides to remain with Tier, becoming his wife and forsaking her Raven duties of protecting the world's people from a long ago evil. But everything changes when Tier fails to return home one winter. With the help of her children, Seraph goes to find her husband and finds that his fate is tied up with the ancient evil that is stirring once again.
There were some aspects of Raven's Shadow that confused me a bit. For example, it took me a long time to figure out what exactly a Raven was. I knew that the Ravens were mages, but it is a bit more than that; to use an example from Dungeons and Dragons, a Raven would be similar to a sorceror, while a non-Traveller mage would be like a wizard. This isn't the perfect analogy, but it works. Ravens are one of six Orders within the Traveller clans, with the other five being Owl (Bard), Lark (Healer), Falcon (Hunter), Cormorant (Weather Witch) and Eagle (Guardian). Not all of the Travellers are Order-bearers, but the Orders are almost always found within the Traveller people. From what I could gather, the Travellers are similar to gypsies, but they have blonde hair.
All in all, I thought Raven's Shadow was an excellent book! It seemed a bit harder to get into at the beginning than Briggs' other works, but I really enjoyed it and can't wait to start Raven's Strike!
Posted by Shauna at 9:02 PM