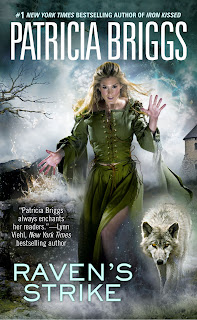 Well, I was a bit slow with reading Patricia Briggs' Raven's Strike, as I finished the Raven's Shadow a week ago. For some reason, it took me a bit to get into it and keep reading. But once I got about halfway through the book (which is about when things felt like they were moving forward, rather than filling in some things that had happened somewhere between the two books, which conveniently happened yesterday) I couldn't put the book down! Raven's Strike was just such an intreguing read, revealing more about the world in which it is set.
Raven's Strike picks up pretty close to where Raven's Shadow left off. Seraph, Tier, Lehr and Jes are returning home to Redern with Hennea, who wants to go and track down the new Shadowed. Seraph convinces Hennea to remain with them; the Shadowed has cause enough to hate the family and will come after them seeking revenge. But right after they return, Tier starts to experience problems with his Order, which is being stolen by the only remaining wizard from those who kidnapped him: the Shadowed. Seraph and her family must then travel to long lost Colossae in the hopes of saving Tier and stopping the Shadowed once and for all!
When I got near the end, I didn't want to put Raven's Strike down, even though I knew I had to work this morning. I saved the last 30 pages for today, which I really enjoyed. The story is over, but I find myself wondering what comes next? I really enjoyed reading about these characters and I hope that Briggs will one day return to their world.
Posted by Shauna at 2:33 PM