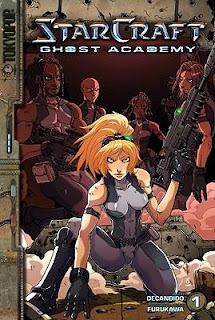 When I first found this book at the library, I was originally skeptical. A few years back, I read a Blizzard manga series (the Warcraft Sunwell Trilogy) and absolutely hated it. But when I saw that Keith DeCandido was the author, I knew I had to give this book a read. Keith DeCandido wrote Starcraft Ghost: Nova, which is a book I really enjoyed a few years ago.
And Starcraft: Ghost Academy Volume 1 did not disappoint! This manga details what happened to Nova when she was training to be a ghost. In the original book, Nova, this was a part of her back story that was missing. According to the Starcraft Wiki, this is the first of three books, although there is the possibility of more, and they will be followed by another novel.
Following a new training protocol, all of the ghost trainees are assigned to a team, which will build their social skills and allow them to work better with non-ghosts in the field. Nova's team is initially one person short, but later assigned the son of the finance minister, Aal Cistler. Cistler isn't a telepath, but he's able to get into the Ghost Academy because of his father's influence. Unfortunately, he doesn't really understand what he's gotten himself into. Meanwhile, Nova has to learn that even though she is incredibly powerful (she has a psi index of 10), she still has to learn to work as part of a team.
Keith DeCandido did a great job, and I'm really glad I picked it up! I can't wait for the next two, and now I'm tempted to try reading the Starcraft: Frontline series!
Posted by Shauna at 7:53 PM