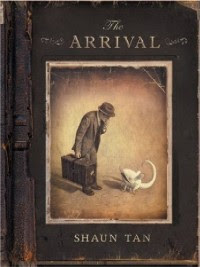 A friend at work recommended The Arrival to me. He told me it was a fast read that was quite good. By "read," he meant "look" because The Arrival is a book told entirely through pictures, not words. It tells the story of a man who emigrates from a land of nightmares to somewhere better, leaving behind his wife and daughter. It is the story of him settling into the new land, which is a fantastical place with strange creatures (like the little white guy on the cover). It is incredibly quick to go through, but it is a nice little story with fantastic artwork. I liked it.
Posted by Shauna at 8:04 PM