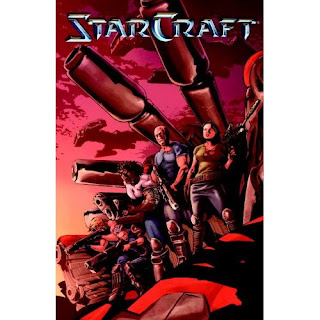 For some reason this graphic novel doesn't have a subtitle of some sort. But after a quick search online I was able to confirm that it IS book 1, which means that the comic series is still ongoing.
The Starcraft graphic novel tells the story of the War Pigs, a band of mercenaries who are reassembled on orders to hunt down and kill Jim Raynor. All of the War Pigs are criminals who were not resocialized, but allowed to retain their independence as a sort of experiment. Unfortunately, along with their independence comes their memories in graphic and sometimes debilitating detail. I found it a bit hard to follow at times (especially when people would start talking about other people who I don't think were mentioned yet but I might have just missed it), but overall it was a good story. I can't wait for the next volume, which will be able to jump into the story without the introductions that were necessary in this one (the War Pigs are, afterall, new characters for the Starcraft universe).
Posted by Shauna at 2:38 AM