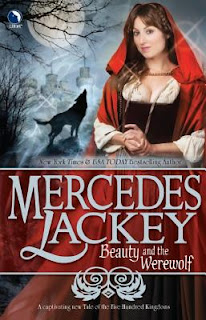 I gave this book only 2 stars out of 5 on Goodreads.  I originally gave it a 3 because I like Lackey's writing style.  But this is not one of her better books.  The Tales of the Five Hundred Kingdoms overall has been kind of hit and miss, and in my opinion this was the worst of the misses.  The plot was too predictable in most regards (I think the biggest mystery for me revolved around the invisible servants, and that didn't really develop throughout the book) and I couldn't stand Bella through a good chunk of the book (as M- says in her review of the book on Goodreads: "the heroine is a spoiled manipulative child with flagrant Mary-Sue tendencies," which is unfortunately quite true).  Unless you're a super dedicated Lackey fan, you'll probably want to give this one a miss.
Posted by Shauna at 2:13 AM