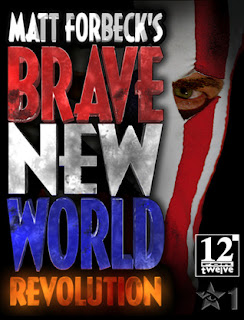 When I first heard about Matt Forbeck's 12 for 12 Kickstarter drive, I thought it was a great idea. If successfully funded, Forbeck gets to write twelve novels during the year, and everyone who supported him gets some hopefully awesome books. No, I had never read any of his books before, but I loved the idea and really wanted him to succeed.

It's now been over a year since the first 12 for 12 drive ended and I received my copies of the first trilogy, set in a roleplaying setting Forbeck created years ago (Matt Forbeck's Brave New World). As I was flying home from California yesterday, I thought it was definitely time to actually read them! And so I read the first book, Matt Forbeck's Brave New World: Revolution, as I was flying home.

Revolution takes place in Crescent City, the city that grew on the edge of the crater where Chicago once stood. Super powered people, called Deltas, are required by law to register and join the American government/army (the Delta division, called Delta Prime). And while many do, there are just as many people who don't want to; they value their freedom and so run from the law. Many of them find their way into the rebellion called the Defiance.

Lisa believes she is an ordinary girl. But suddenly her life is turned upside down when both Delta Prime and the Defiance, led by Patriot, an ex-Delta Prime member, come looking for her. Patriot is captured while saving Lisa from Delta Prime. And so she finds herself teaming up with other members of Defiance to rescue a man she doesn't know, all the while trying to figure out why everyone wants her so badly.

I have to say that I really liked Revolution. So much so that I'm almost finished the second book, Revelation. I like the setting and I really like both Lisa and the Patriot (along with all the others!)  I do apologize for the future posts on this trilogy though: there will be spoilers!
Posted by Shauna at 4:33 AM