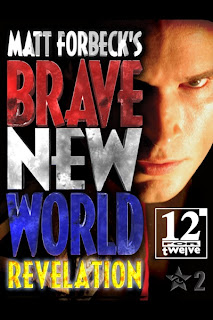 So I finished Matt Forbeck's Brave New World: Revelation last night.  I was really tired, but so near the end that I wanted to finish it before I slept.  And the ending was definitely worth the loss of sleep!

Revelation takes place a few weeks after the events of Revolution.  Patriot, Lisa and company are sent to Colorado to answer a family's distress call; it seems they were attacked by a super-powered man.  A man who may have just fallen out of the sky after the detonation near the end of the first book.  Their world is rocked when they discover the identity of the man: it's Superior, the world's greatest alpha-powered delta.  Superior disappeared along with Chicago 23 years ago.

Of course, they're not the only ones after Superior and the family of deltas he attacked.  Delta Prime is hot on their heels, bringing down their jet-van into a Catholic Church.  Patriot needs to find a way to get all of them out alive, which becomes less likely by the minute as they're surrounded by Delta Prime.

I have to say, for most of this book, I thought it was okay.  It wasn't as good as Revelation (which may in part have been because there were a lot of new characters who took center stage along with Lisa and Patriot).  But then the end happened.  I'm talking about the very end of the book, after the climax.  I wasn't at all prepared for it, even though in some ways I felt like I should have seen it coming.  After being blown away by that, I really can't wait to see how all of this ends in the final book!
Posted by Shauna at 3:02 PM