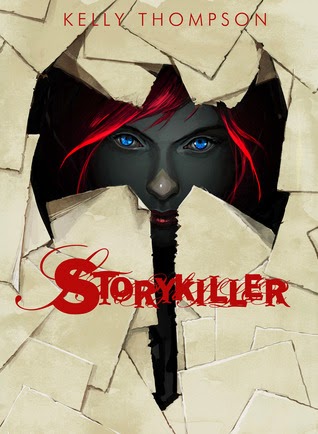 A little while ago, I came across the Kickstarter for Kelly Thompson's Storykiller.  I loved the premise and decided to kick in some money, scoring myself an ebook copy.  There was a really quick turnaround time on Thompson's part, and so I had my copy a week or two after the Kickstarter ended.  So after finishing Hounded, I decided to give Storykiller a try.

Storykiller is the story of Tessa Battle, the last Scion.  Tessa has moved back to the town of Lore, which is where the boundaries between the Mortal world and Story world are thin.  Story is made up of every character from every story mortal people have ever told.  Well, with the exception of those stories that have been killed by the only person who can kill them: the Scion, who is descended from both Mortal and Story.  And Tessa is the last.

Storykiller is very heavily inspired by Buffy the Vampire Slayer.  Tessa is the chosen one who has super powers.  She's still in high school (her superpowers manifested on her 17th birthday), dealing with normal teenage drama while having to save the world (and fighting things off practically every night).  She has two best friends, a guy and a girl (in this case Micah and Brand) who have known each other forever.  Oh yeah, and Tessa had an Advocate, who seemed to have a similar role to Buffy's Watcher, Giles.

But there are differences, too.  In Storykiller, every character from a story exists (until killed by a Scion, at which point their story disappears, too).  So that meant Storykiller had a whole host of interesting characters to play with.  These ranged from Snow, the Snow Queen who gets stuck staying in the Mortal world against her will, to Fenris, Frankenstein's Monster, Morgana, and Robin Hood.  All of these characters were interesting as they were both bound by their fictional stories, yet trying to fight them, too.  They set the story very firmly in the world of Lore as opposed to Buffy's Sunnydale.

While I enjoyed the story, I had a big issue with the writing of Storykiller.  During the first half of the book in particular, I felt like the book was written very amateurishly, especially thanks to the repetition and phrasing of things.  More than once I kept wishing the book had been delayed in favour of further editing, especially since the Kickstarter was so successful (Thompson raised $57,000, wildly exceeding her $20,000 goal).  I had less problems with the writing in the later half of the book because the story was getting super good.  But there were many points in the beginning where the writing knocked me out of the narrative.  I actually almost stopped reading a few times; while I am glad I kept going, I felt this really hurt both the book and my feelings towards self-published stories.

Writing-style aside, as I said, I enjoyed the story.  If you like Buffy the Vampire Slayer, or just want a fun romp with fairy tale characters, Storykiller is for you.
Posted by Shauna at 5:54 PM