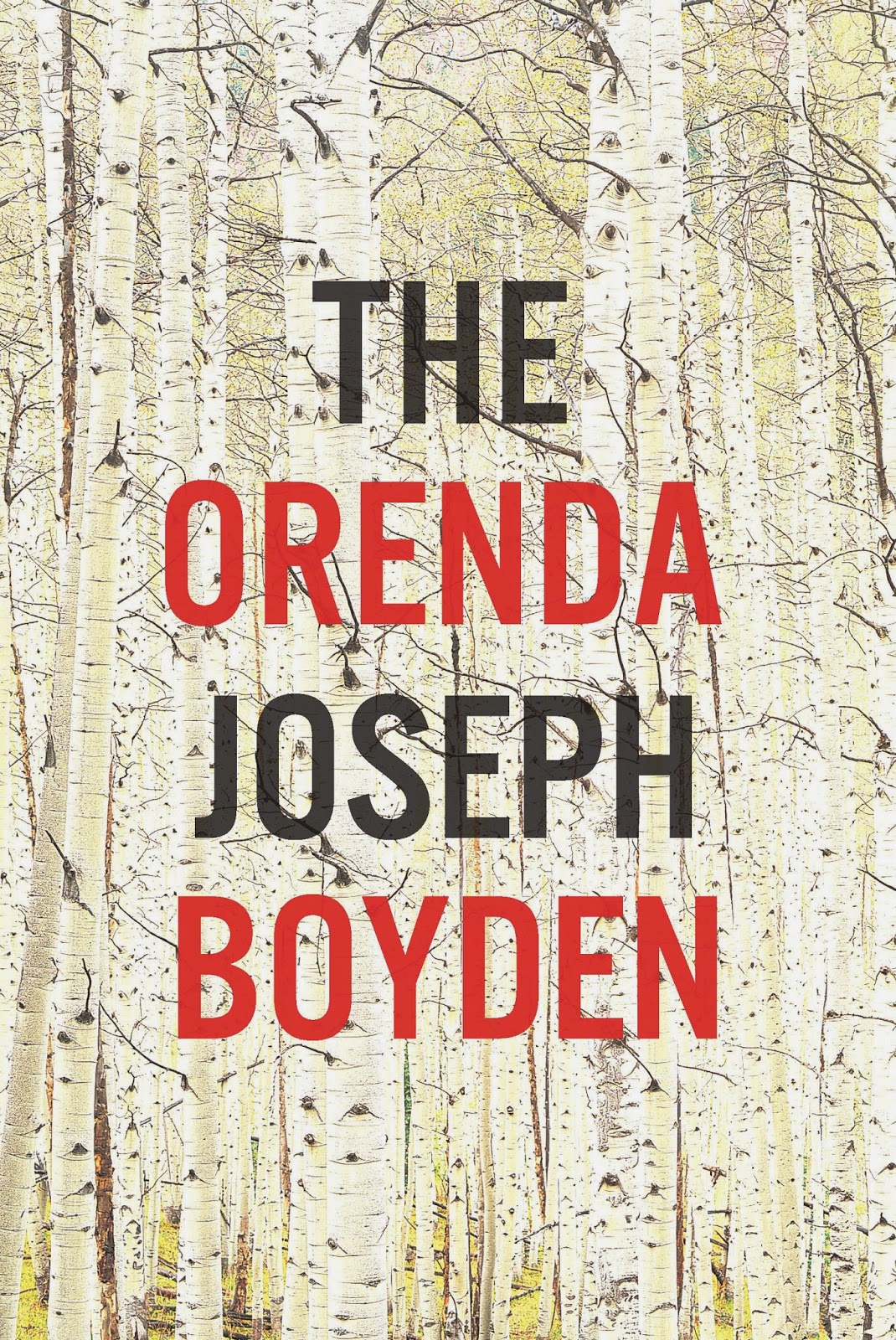 I don't know if you're familiar with Joseph Boyden's The Orenda, but the book has been getting a lot of press lately.  It was longlisted for the Giller Prize, shortlisted for the Governor General's Award, and won this year's Canada Reads competition.  I went to see Joseph Boyden speak at my local university (prior to the book wining Canada Reads this month).  The talk was entitled "'The Past and the Future are Present': Race Relations in Canada."  So I thought the talk was going to be focussing on race relations.  Unfortunately, I didn't realize it was going to focus so heavily on his newest book, The Orenda, which I hadn't yet read.  So after hearing him speak, (and asking him to sign one of his older books, Three Day Road, which I purchased there), I borrowed The Orenda from my brother and started reading.

This post is going to have spoilers.  There's a lot I want to talk about it in, so if you don't want to know what happens, you may want to stop reading now.

The Orenda is a historical novel that looks at the conflict between the Iroquois and the Huron Nations.  The Europeans have come to the New World, and have begun trading with the Native People.  The French have allied themselves with the Huron, but part of that alliance means the Huron must let a Jesuit Missionary live among them.

The novel follows three people: Bird, a Huron warrior who lost his family to the Iroquois, Snow Falls, a young Iroquois girl adopted by Bird after he kills her family, and Christophe, the French Jesuit Missionary who is brought by Bird to live among the Huron.

Of the three main characters, Bird was my favourite.  He was haunted by the loss of his wife and children, and so he adopts Snow Falls in the hopes of alleviating some of that pain.  He is the one who brings Christophe into his people, recognizing that bad may come of it.  And despite nearly killing the missionary several times, he doesn't (even saving the man's life when he knows it might be best to let him die).  Bird is complicated, growing and changing as he struggles to ensure his people's survival against the Iroquois.

Snow Falls was a very interesting character, especially in the beginning of the book.  She saw her parents and family killed before her eyes, and then was supposed to become part of the family of the man who killed them.  That is an extremely difficult situation, and so she behaves like a wild animal, trying to keep her new people (who are supposed to be her enemies) away.  But slowly she becomes one of them, even finding to her shock that she has learned to love her new father.  Unfortunately, around this time she became a lot less interesting in a way, being relegated to a woman who does women's work (like have babies).  While it's stated that she has her own magical/special abilities, beyond being told she'll learn to use them, we never actually see her learning them.  This is a real shame.

Snow Falls also helps the man who becomes her husband kill an Iroquois band, which I thought was an interesting point within the book.  But nothing much comes of that either, which was another shame.  When that happened, I thought that maybe Snow Falls would actually take up arms to help defend her new people against her old people.  I think that incident brought to mind this essay by Kameron Hurley, in which a history professor tells her that women have always fought in battles throughout all of human history.  If ever there was a point when women should be fighting alongside the men, it was most definitely the climax of the book, when the Iroquois attack the Jesuit Missionary, which is where the remaining Huron have fled to.  And sure, maybe Snow Falls and Sleeps Long wouldn't be fighting because they recently gave birth.  But why were ALL of the other women hiding along with the children and the elderly?  Shouldn't some of them have been fighting for their survival, too?

Anyway, that was Snow Falls.  The final main character was Christophe, the Jesuit Missionary who came from France to convert the Native People to Christianity. While reading Christophe's chapters, I was struck again and again by the arrogance of the Europeans.  It reminded me a lot of reading Sir Richard Burton's First Footsteps in East Africa back in 2009.  I didn't really say much about that book back when I read it, but Sir Richard Burton is very down on the people in East Africa.  He goes into the continent thinking the people are stupid because they are amazed by the most simple European things.  Christophe is very much like Sir Richard in that regard.  He thinks the Native Americans are simple savages, people who have the possibility of one day becoming great (ie European), but who are hopelessly misguided by Satan.  Christophe believes he must bring them into the fold of Christianity.  It was at times very hard to read his way of thinking and his arrogance, even knowing that it is historically accurate (again, look to Sir Richard Burton's book for proof).

Christophe is joined by two other missionaries, Gabriel and Isaac, part way through the book.  Gabriel is rather stern, and becomes Christophe's right hand man, especially after the sunnier Isaac is tortured by the Iroquois.  While Isaac is returned to his people, he is a broken man (both literally, as they destroy his hands, and mentally).   The interplay between the missionaries was at times interesting, especially since Isaac seemed to understand the Huron better than the other two men ever could.

The other two characters I'd like to mention are Gosling and Fox.  For her part, Gosling was a very mysterious Ojibway woman who lived with the Huron.  She helps Snow Falls find her way with her new people, while at the same time annoying Christophe to no end.  Fox is Bird's best friend and brother in arms.  The two are always out hunting together, and they know what the other needs without having to speak.  Fox had an amazing end in the book, single-handedly harassing the Iroquois army and returning when it seemed like he had surely perished!  As the book went on, Fox easily became my favourite character over even Bird.

The Orenda is told in three parts.  The first part was easily the best, telling of how Snow Falls came to be part of the Huron people.  This was also how Christophe came to learn their language, and how Bird strengthened his people's ties to the French.  The second part was mainly about the hardships that befell the Huron, particularly the diseases that killed many of them after the Europeans arrived.  This is also the story of Snow Falls growing up into womanhood.  The final part is the fight for survival against the Iroquois.

While reading The Orenda, I was struck by how much the Native People reminded me of Vikings, in their way.  They were stuck in a circle of violence, where they were constantly trying to avenge themselves of wrongs the other inflicted (which were likewise the other's revenge).  Sure, the methods and beliefs of both people are very different (I've never come across torture in viking literature the way it was present within The Orenda), and I'm not trying to paint them in a similar light.  But to me, that circle of violence was one and the same.

The torture was something I'd like to comment on as well.  Along with Isaac, several characters are brutally tortured within the book.  Bird brings three captive Iroquois back to the village; two are tortured to death (while the third Bird adopts at the request of Snow Falls).  During the third part of the book, the characters (especially the men) worry about surrendering or being captured, knowing that they will be tortured to death if they do.  And Christophe meets his end being graphically tortured for three days by the Iroquois.  These were all very hard sections to read, no matter who was on the receiving end of the torture.

One last think I'd like to comment on is the interesting tie-in within The Orenda to another book I read for school, Leonard Cohen's Beautiful Losers.  Okay, it's not necessarily a tie-in per se.  It's just that if I had never read Beautiful Losers, I would never have picked up on the references to Catherine Tekakwitha (who is apparently Snow Falls' child within The Orenda).  Right when Gosling first told Snow Falls about her vision of Snow Falls' daughter and how she would be a Holy woman for the Crows (the missionaries), I knew who Snow Falls' daughter was supposed to be.  And this was later confirmed when the Iroquois chief, Tekakwitha, adopts the child at the end of the book.

So now that I've read The Orenda, I'm not really sure what I think about it.  Certainly it was an interesting historical epic, especially in the first part.  And sure, there were many characters I liked, and others I didn't (which is to be expected).  The beginning was quite good, but the middle really dragged.  And then the end happened.  I already mentioned the torture of Christophe, which I wasn't fond of.  But the end in general was  rather strange.  None of the main characters died through most of the book (even when facing raiding parties and disease).  But then the end happens and a bunch die quite suddenly, from war (understandable), to poison (which while you can say was somewhat foreshadowed, it still seemed weird, especially when shown from Snow Falls' perspective - she ate a poisoned wafer, but didn't want to be rude and spit it out).  Overall though, I was intrigued by the story, and I am glad I read it.
Posted by Shauna at 11:55 PM

If you found the descriptions of torture difficult, I can see your opinion of this novel being greatly diminished.