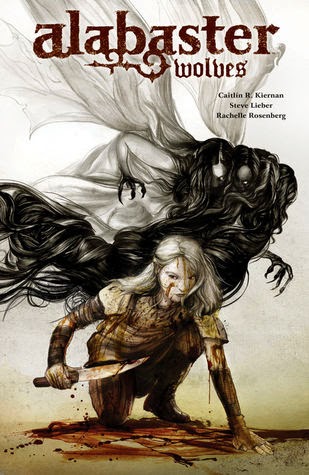 I've always wanted to read something by Caitlin R. Kiernan. So when I saw the graphic novel Alabaster: Wolves go by, I decided that there was no time like the present.

Alabaster: Wolves is about a young albino girl named Dancy Flammarion. Directed by a seraphim angel with a flaming sword, Dancy fights all manner of monsters. But when she wanders into a South Carolina town infested with werewolves and demons, she is abandoned by her angel and must find a way to survive with only the help of a red wing blackbird and the ghost of a girl with questionable motives.

For the most part, I enjoyed Alabaster: Wolves. But I did feel like I was dropped into the middle of the story and that I would have benefitted from more information, particularly involving Dancy. While Alabaster: Wolves collects the first five issues of the comic series, a bit of research told me this is not the first Dancy story. Dancy first appeared in Kiernan's novel Threshold, and later in some short stories (which were later collected in Alabaster). So I'll probably go looking for them at some point.
Posted by Shauna at 2:50 AM