The Scotti and 'Fairies Don't Exist' 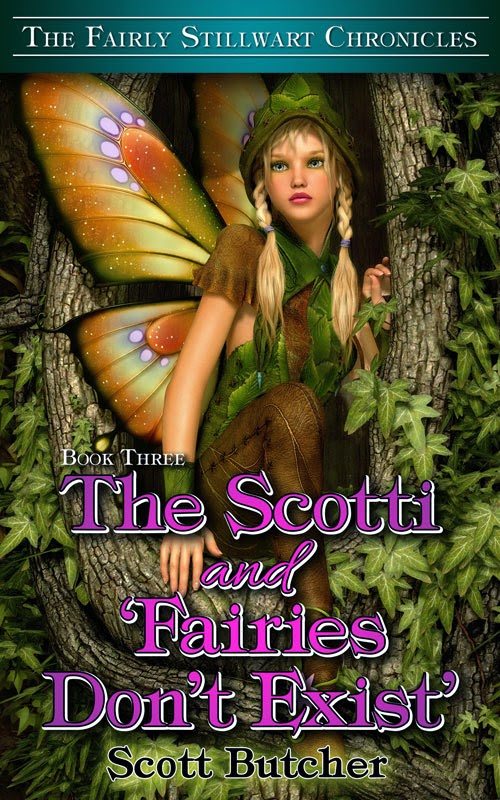 Here we are with The Scotti and 'Fairies Don't Exist,' the third Fairly Stillwart Chronicle from Scott Butcher. The Scotti picks up just after A Pixie Pilgrimage left off: Stillwart and company are still trying to make their way to the Northern Fairies in Ireland. They've managed to go from Vancouver to Montreal, but here they've been stopped by customs because they don't have the proper paperwork. Rather than wait around for weeks, they decide to bust out of the airport and find another way to Europe. Luckily the two daughters of their human friend, Phoebe and Lucy, live in the city; with a bit of convincing that fairies really are real, the gang is on their way to Newfoundland to catch a chartered flight to Dublin.

But along the way, Fairies Don't Exist, the feral fairy Stillwart and company picked up in Vancouver, tells them that a Thorn Tree is calling to her. Following her directions, the company finds a group of fairies named the Scotti. The Scotti's Thorn Tree was damaged by human hands long ago; with its magic blocked, the Scotti have been slowly dying. It's up to Stillwart and company to save the day!

Like the other Fairly Stillwart Chronicles, The Scotti and 'Fairies Don't Exist" is another quick and enjoyable read. Just be warned: this book ends on even more of a cliffhanger than A Pixie Pilgrimage did.  I can't wait for book 4 to read more of Stillwart's adventure!
Posted by Shauna at 8:54 PM