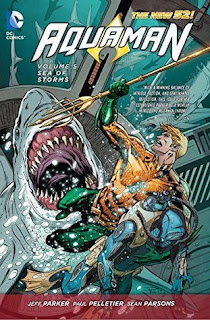 This....was not the story I thought it was going to be.  Aquaman Volume 4 left off with Arthur Curry's half brother being visited by the king of Xebel, who was reuniting the rulers of the seven sea kingdoms to take down Aquaman.  It had long been thought that Atlantis was the last one.  Turns out that's false.  So I was super excited to read that story.

Aquaman Volume 5: Sea of Storms was kind of all over the place.  Aquaman discovers there's a human base in the sea.  He wasn't able to deal with it at the time though (for reasons).  The base is experimenting with a piece of the brain of an Atlantean monster that Arthur had to kill.  After that, Arthur and Mera attended his high school reunion (where he discovered that many of the people he went to school with are still okay with him, even though he ran off from high school).  While he was at the reunion, an archeologist stole Arthur's trident and used it to open a portal.  He thought it would go to Atlantis.  Turns out it just went to Hell, releasing the Giant children.  So Arthur and Wonder Woman dealt with most of them.  Mera and Wonder Woman dealt with the rest.  But then there was a giant algae monster that Arthur had to deal with because it was killing a reef.  He battled the green avatar for no reason (the green avatar kept telling him to stop, but apparently Arthur Curry is kind of dense like that).  Eventually the green avatar went and dealt with it (but was almost nuked by Atlantis in the process).

So yeah.  This was a super weird volume.  A different writer took over from Geoff Johns, so that might have made a lot of the difference.  Hopefully Volumes 6 and 7 will be more coherent!
Posted by Shauna at 1:15 AM