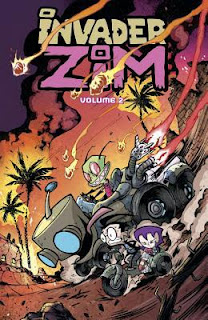 Well, no use in waiting.  I read Invader Zim: Volume 2 immediately after finishing Volume 1.  And Volume 2 seemed even crazier than Volume 1!

This time around, we had Zim applying for a loan in a human mech suit.  Gir is piloting the legs; when he sees popcorn, he sends the legs in an opposite direction, tearing the mech suit in half.  Hilarity ensues as Zim tries to track down Gir (and the legs).  Next, Zim and Gir crash land on barren planet.  They trigger something which causes millions of years of evolution to happen in mere moments.  And end up battling giant bugs to get their Voot Cruiser back.  Then we had the pants aliens conquering the planet at Zim's invitation, turning humans into pants zombies.  Next Dib became Zim's intern to try to get better footage of Zim's base.  And finally, Zim went on a hunting trip to bring something truly terrifying back to Earth to impress his classmates.

Volume 2 is in some ways more wackier than Volume 1 was; I think it was by Chapter 2 that I felt "here it is, here's the show I loved."  I'm all Zim-ed out for tonight, which is fine because Volume 3 isn't out yet.  But I can't wait for when it is out - I think it'll be awesome!
Posted by Shauna at 9:20 PM