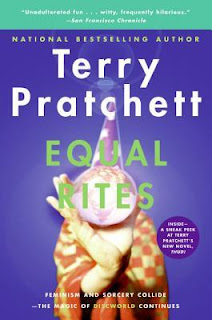 My original plan after finishing Warbreaker was to read Under Heaven by Guy Gavriel Kay.  But with how epic in proportion Warbreaker was (and suspecting that Under Heaven may be of a similar scope), I decided to look for something completely different.  What I decided on was Equal Rites by Terry Pratchett.  Equal Rites was an odd choice, especially considering I wasn't very fond of Guards! Guards! earlier this year.  But I knew that I wouldn't have to take it at all seriously.  Besides, it is the first Discworld book featuring the witches.  I read Wyrd Sisters years ago and enjoyed it; I was willing to take a chance on this one.

Equal Rites is the story of Eskarina Smith.  She's the eight daughter of an eighth son.  A wizard passes his staff onto her at her birth, believing she is the eight son of an eight son.  He only realizes his mistake too late to change it.

For the first several years of Esk's life, nothing remarkable happens.  Granny Weatherwax, the village's witch, had attempted to destroy the wizard staff to no avail; wizards are men, witches are women; there's no such thing as a female wizard.  So instead, it was forgotten in a corner of Esk's father's blacksmith.  But when Esk is threatened, it is quick to come to her rescue.  And with Esk suddenly exhibiting magic, Granny convinces Esk's parents to let her train the girl.  Unfortunately, Esk's magic proves to be the wizarding kind.  And so the two of them set off to try to convince the Unseen University to properly train Esk in wizardry.

The first half of the book is pretty great.  Esk is a very willful girl, who refuses to let anything stop her from getting to Ankh-Morpork.  It leads to some hilarious adventures, like when she goes up to a caravan leader and ends up asking the way to the city when he refuses to let her come with him.  When he realizes she is going to walk on the dangerous, bandit-laden roads on her own, he hurriedly goes after her to let her come with the caravan.

Unfortunately, once Esk makes it to the Unseen University, her story really loses its charm.  She was laughed at by the wizards, so she seems to take their words to heart.  She actually throws her staff away into the river at one point, after it hits her friend, Simon (she doesn't realize it, but the staff saves her and the University from him).

Luckily Granny Weatherwax is there for the rest of the book!  Granny Weatherwax is rather like the older version of Esk - she is determined and won't let other people stop her.  She barges into the University's dining hall (where women are NOT allowed) and ends up in a wizarding battle with the Arch-chancellor.  They have to break off their battle when other students tell them Esk has left her body in an attempt to rescue Simon (he had never woken back up after being hit by Esk's staff).  So they form an unlikely friendship trying to save the two young people.  I don't really know what Granny Weatherwax's feelings were on the matter, but the Arch-chancellor definitely found himself admiring Granny's figure and otherwise being somewhat tempted away from his celibate life.

Although it sort of lost it in parts, Equal Rites was a pretty fun romp through the Discworld.  I definitely preferred it to Guards! Guards!, although I don't think it was as much fun as either Wyrd Sisters or Reaper Man.
Posted by Shauna at 2:13 AM