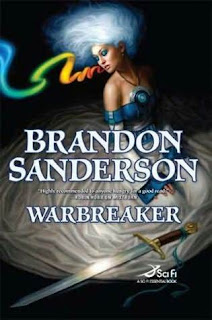 Warbreaker by Brandon Sanderson is a book I've been interested in reading for a long time. Earlier this week I hurt my head and was told to limit my screen time. So I've spent the week reading (which is why this is the third book I've read this week already!) I decided to read Warbreaker because my copy is a hardcover; since I'm not going far this week, it seemed like the perfect time to read it.

Warbreaker is about the two Idrian princesses, Vivenna and Siri. Their father signed a treaty with Hallandren years ago, promising a Hallandren princess would be wed to the Hallandren God King at Vivenna' s 21st birthday. Everyone is surprised when their father sends Siri instead of Vivenna. Vivenna has spent her entire life training for this. Siri has not. So Vivenna decides to go to Hallandren to rescue her sister.

Siri is woefully unprepared to deal with the politics of the priests and pantheon of Hallandren. In Hallandren, they worship the Returned as gods and goddesses. The Returned are people who come back after they have been killed; they're believed to have visions of the future in their dreams. So they are pampered - having servants and a priesthood dedicated to providing for their every wants and needs. In their turn, the Returned are expected to give up their divine Breath to heal someone eventually.

One of the current pantheon is Lightsong the Bold. He completely refuses to believe in his own divinity. He does everything he can to shirk his divine duties (and is very much annoyed that no matter what be does, people seem to follow him and believe in him anyway).

Lightsong crosses paths with Siri in the court. He is the one to realize that she is truly unprepared for where life has sent her - she is as naive as she looks.

And of course, Siri being Siri, she starts to assert herself in hee own way. Which leads to a surprising development with the God King.

Meanwhile, Vivenna arrives in Hallandren and discovers she is woefully unprepared for life in the colourful city. She makes the acquaintance of some mercenaries, Denth and Tonka Dah, who agree to help her try to rescue her sister. And as war between Hallandren and Idris seems to loom ever closer, they help her try to disrupt the war to give her outnumbered people a better chance.

And I loved how people of one faith  (generally Vivenna from Idris) interacted with people of another faith. For example, Vivenna found out that one of the mercenaries, Jewels, gave her Breath to the God King when she was a child. Vivenna pitied her, believing it was a horrible thing and that she had to have been coerced or otherwise forced into it. But no, Jewels is proud of giving her Breath away. Confronted with that, Vivenna tries to rationalize it with her own faith....and can't. This sort of thing happened with Vivenna over and over again, always in different ways. It was a fantastic way of showing how different people viewed the world and how someone's beliefs can challenge your own. And the beliefs all came naturally from the world Sanderson built. I loved it!!!

Oh, I haven't really touched on the mystery in the book either. Lightsong takes interest in a murder that happened in one of the other goddess' palaces. Everyone else takes no notice of it. But he does, investigating and interviewing witnesses. He finds he's quite capable, which leads him to investigate what else he might be good at - what other memories came back with him from his life before he Returned (which he can't remember).

Oh and I need to also mention Vasher and the mysterious sword he carries, Nightblood. Nightblood is sentient and completely hilarious (which is the exact opposite of Vasher, who is stoic and says very little). The sword has no real understanding of time passing, and seems to think everyone is talking to it almost all the time. It was great.

Another interesting duo were Denth and Tonka Fah. They were always spouting off "mercenary humour," complaining about why no one like mercenaries. They (mainly Denth) were the ones who started to open Vivenna eyes about the way she looked down on the people around her (even though her religion said not to, and she is extremely pious). Sanderson's treatment of them was fantastic - their betrayal hit me like a punch to the gut in much the same way it hit Vivenna.

The God King was another interesting character. Siri discovers he has no tongue and is largely ignorant of life in general. But he is gentle and has a large intelligence in his eyes. She teaches him how to read and write in secret; as they begin to communicate, they end up truly falling in love.

So yes. Warbreaker gives us political intrigue, war, mystery, love, betrayal, a fantastic plot that keeps you guessing, great characters, a fantastic world and an incredible magic system that revolves around colours and Breath. I absolutely loved this book! It is hands down the best fantasy I've read since Naomi Novik's Uprooted. Loved it, loved it, loved it!!!
Posted by Shauna at 12:40 AM