A Short History of Progress 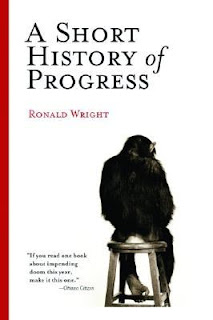 My brother read A Short History of Progress awhile ago.  I was intrigued and wanted to read it as well.  Earlier this month I asked him to borrow it.  I started it earlier in the week (before reading I Am a Truck; I took a break from this because it's a heavy read and I wasn't in the mood for it the night I started the other book), and finished off the last three chapters today (two in the afternoon, the final one just now).

Ronald Wright looks at human progress, particularly how civilizations have risen and fallen, to show the pattern and ultimately warn us where we're at today.  His central message is that progress isn't always a good thing.  Progress keeps speeding up - learning to tame fire took a long time, learning agriculture happened a bit more quickly, and each subsequent discovery has happened faster and faster, to the point where multiple new things are being discovered/iterated upon within single lifetimes (rather than over the multiple lifetimes previous things happened over).  He also makes the point that when we get good at something, we sometimes take it too far - his best example of this was when humans learned better hunting methods, we slaughtered whole herds of animals.  This was great for awhile, but ultimately ended with extinct animals and a shortage of food (which paved the way for agriculture).  Likewise, we have a history of starting out with small villages in good areas; but the villages grow and we start paving over the good farm land to make more room for houses (not a great plan).  We lack the ability to long-term plan, and ultimately we need to do so if we want our current civilization not to be our last one in the face of ecological collapse.

Wright looks more closely at six civilizations, four of which completely collapsed.  (The other two have fallen but managed to limp along and survive for thousands of years).  He shows the commonalities between them (and pretty much all of the civilizations humans have created) and just how they collapse.  The worst part is, these civilizations have all collapsed in similar and predictable ways: they outgrow what nature can provide to sustain them, because they failed to sustainably take resources from the planet.  Civilizations also end up in "pyramid schemes," with the wealth and power concentrated in the small top proportion.  Sound familiar?  It should.  But this time we won't have the bonanza that the discovery of the other half of the planet was last time...

While I am now left with a bad taste in my mouth, realizing just how much our current civilization is poised near the end (even worse, how much things haven't changed in the fourteen years since the book was released), I think the book is excellent and very much worth reading.  Everyone should read it, particularly if they are politically in power.  If humanity doesn't collectively do something NOW (and admittedly it may already be too late), we'll have destroyed our home.  And for what?  A little more progress and greed?  For a species that prides ourselves on our intelligence, we're quite dumb if that is the answer.
Posted by Shauna at 1:35 AM