I Am a Truck 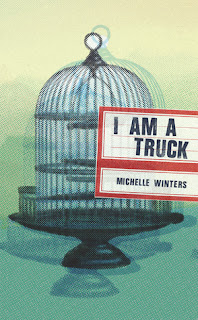 My brother sent me his copy of I Am a Truck in the mail the other day.  He was planning on exchanging it at a used book store, but saw that it was on my Goodreads Want To Read shelf, so he sent it my way instead.  I came across it while looking at the giller Prize nominees (it was a finalist); I think the title is hilarious, and it sounded interesting enough, so I thought I'd read it when I got a chance.  The book is a slim volume, so I started reading it the night it arrived and finished it the next day.

I Am a Truck is the story of Rejean and Agathe.  They're about to celebrate their 20th wedding anniversary when Rejean doesn't come home.  His Silverado truck, which was his pride and joy, is found abandoned on the side of the road. Agathe can't imagine him leaving her, but when he fails to come home after a few weeks, she takes a job in the mall.  She spends her breaks fondling the shirts she used to buy Rejean in the Big and Tall department of a nearby store until she falls in with her coworker, Debbie.  Debbie shares her knowledge of rock and roll, a genre Agathe always loved but was never able to listen to because of stigma from her family.

I liked how the narrative was structured, showing us what was happening with Agathe in the hear and now, and showing what happened to Rejean in the past that led to the Silverado being found on the side of the road.  Rejean had struck up a friendship with Martin, a Chevy salesman.  Martin was an awkward little man who had no family and friends; his friendship with Rejean meant everything to him.

I really, really liked the book up to until the point where you find out what happened to Rejean.  I thought everything was great, and the moment was a real gut punch (even though I kind of had an inkling of what might happen).  But then the book kept going.

Rejean had boosted Martin's truck, and was then hit by a transport.  I figured at that point that Rejean was dead.  But he survived somehow, and was nursed back to health by Colonel Weed, some mobster-type of guy who lived out in the woods making cheese (then getting people to sell the cheese and taking a rather large cut of the proceeds).  For some reason, this whole scenario made me think of the patron of Cancun from Dolphin Dreams.  But anyway, Colonel Weed nurses Rejean back to health (and loves that Rejean is French - the two converse quite a lot).  Rejean has lost his memory, and so just stays out with Colonel Weed for quite awhile, until gradually becoming an enforcer (that's why no one has seen Rejean for months).  Rejean is sent to shake up the manager at the store Agathe works at, which is the only reason she finds him.  He comes back to their home, but he remembers nothing.  Eventually, Agathe decides she has to let him go because it is the better option rather than continuing to live in mental agony with him not remembering her.

In my mind, that whole part of the book was ridiculous.  It robbed the emotional impact of when it looked like Rejean was gone.  And rather than everyone just slowly moving on with their lives (or not, as Martin probably would not have), the book took crazy and unwelcome turns.  It's a real shame, because before all this happened, I would have heartily recommended the book as a quick and interesting look at moving on after loss.  But now it's just this weird thing that had the potential to be so much better.

But hey, it still got nominated for the Giller.  So obviously there are people who don't feel the same way as me about it.
Posted by Shauna at 5:03 PM