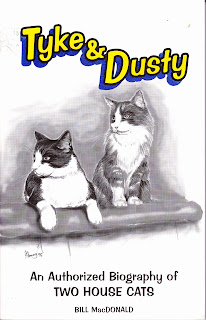 A few friends of mine keep giving me hilarious and random cat books for my birthday and other special occasions (that's how I ended up with Rhubarb).  That's how I ended up with Bill MacDonald's Tyke & Dusty: An Authorized Biography of Two House Cats.  Hilariously, Tyke & Dusty is not the first book I read by MacDonald; I picked up Vive Zigoto! Travels Through the South of France with a Lady Journalist and Her Cat many years ago (before I started this blog!) MacDonald was a local author who was very prolific; I believe the local library has around thirty of his books!

Tyke & Dusty goes through the lives of MacDonald's male cats Tyke and Dusty.  He and his wife, Cathy, got Dusty first; they talked MacDonald's aunt into taking the kitten on a trial basis, but after that didn't work out Dusty went to live with MacDonald.  A few months later (MacDonald and Cathy thought he might be lonely and unhappy at the time, though in hindsight they realize this probably wasn't the case), they adopted Tyke.  Where Dusty was a laid back, mellow, and friendly boy, Tyke was a tom cat through and through who was very athletic and liked to pick fights with other cats.

Tyke & Dusty details the lives of these two cats, from living in an apartment, moving to a bungalow, and spending their summers out at Silver Islet.  Their adventures are wildly entertaining and unique to each cat because of their wildly different personalities (and athletic abilities).  Despite running free out at Silver Islet every summer, both boys lived to very respectable ages: Tyke passed away at 16, while Dusty lived to be 20!

MacDonald gives the cats dialogue through the book (he mentions it in his foreword; it is what he believed the cats might have said under the circumstances).  I found most of this was completely unnecessary because MacDonald's writing while describing whatever situation the cats were in made it pretty clear what the cats might be thinking (particularly to anyone who lives with a house cat, who I think is the main audience for this book).  Sure, some of the dialogue he wrote for them was clever, but overall it was rather unnecessary.

I also found it interesting that MacDonald also notes that he read The Cat Who Came for Christmas by Cleveland Amory.  Within the book, Amory says that he doesn't like how most animal books end with the animal dying, so he ends the book before the animal dies.  Unfortunately MacDonald does not do the same within Tyke & Dusty; he goes right to the end of both their lives (and I cried a lot during the last few chapters).

I wouldn't be opposed to reading more of MacDonald's writing.  From reading Tyke & Dusty (I don't really remember Vive Zigoto!) I quite liked his writing.  :)

As a side note, for some reason I keep pronouncing Tyke as "Ty-kee," even though I'm pretty sure it's supposed to be just "Tyke" (rhyming with "trike" or "bike").
Posted by Shauna at 4:36 PM