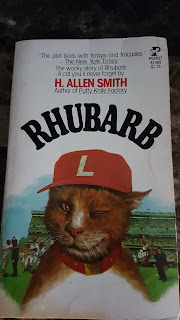 A friend of mine found H. Allen Smith's Rhubarb and gave it to me (I have a few friends who give me hilarious looking and sounding cat books).  I wasn't really sure what to make of Rhubarb, but it sounded hilarious (especially when it had an endorsement by Prof. Elmer Roessner from the first review that stated "This book betokens the death of the novel form in America").

Rhubarb is the story of a cat named Rhubarb that inherits a fortune and a baseball team.  Just before his owner passed away, the man decided to bequeath everything to the cat rather than his daughter; he also named Eric Yaeger as Rhubarb's guardian.  So his daughter challenges the will.  Yaeger has his hands full trying to protect the cat while also bringing him out into society because of course once the press gets wind of what happened Rhubarb becomes an instant celebrity.  On his side, Yaeger has Doom, an ex-bookie who has dreams of being a detective, Miss Polly Pinckley, the strong, beautiful, and wealthy neighbour to Rhubarb, Miss Clarissa Wood, a self-proclaimed expert on cats, Willy Bodfish, the cook, and Len Sickles, the manager of the baseball team.  Along with defending the will, the team also has to convince Rhubarb's baseball team that it's okay to be working for a cat!

The premise is quite funny (I loved how everyone got so excited about Rhubarb being so wealthy - like hotels would try to turn Eric and crew away because he had a cat with them until he told them it was Rhubarb, then suddenly everything was fine!) but the book gets bogged down in quite a few places by things that really don't matter.  For example, there was a whole chapter talking about Lester's wife, who has no actual bearing on the book.  At times like these, I found it really hard to keep reading the book because I was bored and wanted to get back to the actual plot (but I've never read a book by Smith before so I wasn't sure if I could get away with skipping chapters).

I was also a bit annoyed with what happened with Miss Polly Pinckley.  She was a really interesting character - she was absurdly strong and was very conscious of her health.  But then she invited Eric Yaeger over to wrestle....and suddenly "he was being the masterful male" and her character toned down.  She became obsessed with sex with him (and he later had to ration sex out to her because she was wanting it too often).  He also had to find something to do with her (but why?  Surely she was getting along just fine before he showed up into her life?) so made her basically a secretary.  Now I know this is most likely thanks to Rhubarb being a product of its time (it was originally published in 1946), but I didn't really like reading this sort of thing.

So all in all, I think Rhubarb had some potential, but the execution of the book as a whole just didn't really work.  If some of the extraneous stuff had been cut in favour of strengthening the actual plot, it would have been a much better book.  Of course, you may think differently than me: looking at all the reviews on Goodreads and Amazon, I appear to be in the minority; most people who have read it think quite highly of it.  So you'll have to read it and judge for yourself.
Posted by Shauna at 10:16 PM